Property owners with land annexed to The City as part of the 2007 Annexation Order OC 333-2007 will see their municipal tax rate change to a City of Calgary rate in 2022. The 15-year taxation clause expired on December 31, 2021. Calgary’s municipal tax rate will be applied to determine your share of property tax based on your property type: residential, non-residential, split-use or farmland. All property types will experience an increase on their property tax bill that will be reflected on their 2022 Property Tax bill in May.

Learn more about annexation, a provincially-legislated process governed by the Municipal Government Act that transfers land from one municipality to another to accommodate growth.

Depending on how you pay for your property tax, the tax rate change will affect you at different times.

For annual payment, The City property tax rate will be used to determine your share of property tax and will be reflected on your May 2022 Property Tax bill due on June 30, 2022.

The City property tax rate will be used to determine your share of property tax and will be reflected on your May 2022 Property Tax bill.

If you pay your property tax using The City’s Tax Instalment Payment Plan (TIPP) your monthly instalments will be revised to ensure your tax account is paid in full by the end of 2022. Your revised instalment amount takes effect in July 2022, as The City waits on the Provincial Budget release before finalizing the Property Tax Bylaw in spring 2022.

TIPP monthly instalments are based on 2021 tax rates.

TIPP monthly instalments are based on the total 2022 tax levy.

When you receive your annual tax bill in May, your instalments from July 1 to December 1 will be adjusted, using Provincial and City tax rates, to reflect the actual 2022 tax levy. Your TIPP instalments will increase to ensure your total 2022 tax levy is paid in full by year-end.

Note: In November 2022, your TIPP recalculation letter may revise your instalment amount for 2023. A revised and more balanced instalment amount may then be applied to ensure your tax account is paid in full by year-end 2023.

Your property assessment and review periods

Your property’s assessment is one factor that determines your share of property tax.

We encourage you to review your 2022 Assessment Notice this January and verify the details of your assessment during the Customer Review Period.

Assessment Search is our online resource for property and business owners to access more detailed information about their assessment and property details.

Get an estimate of your property tax bill before May 2022

A more accurate estimate can be provided once the Provincial Budget is approved, and City Council passes the Property Tax Bylaw in the spring.

Visit calgary.ca/taxcalculator to learn more and see how your property tax dollars are invested in City services. 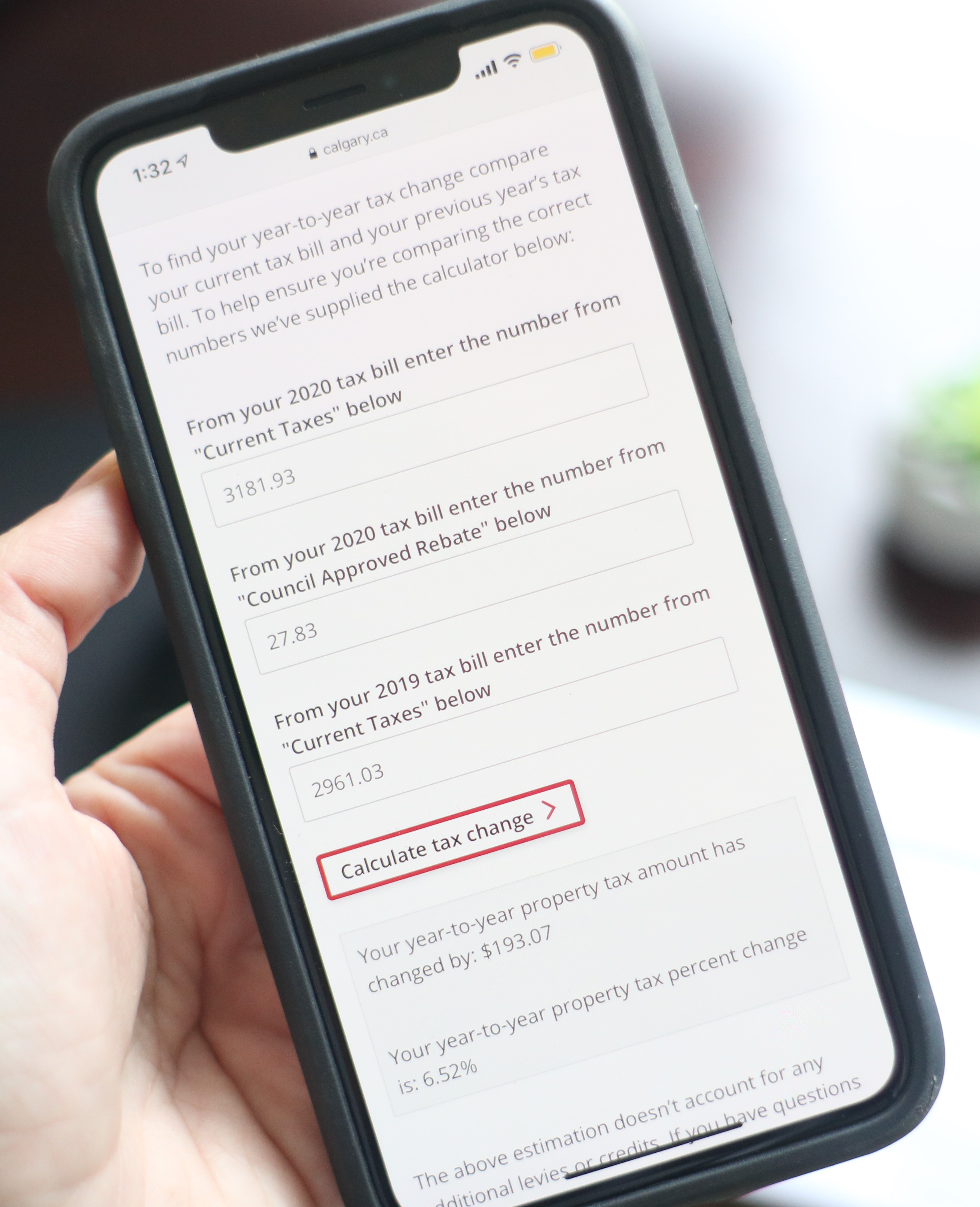 How can I request or inquire about other City services not related to my property's assessment?

Please contact 311 to discuss any additional City service inquiries you might have that are not related to your property's assessment.

The City provides services and programs to annexed properties that are logistically and financially feasible. Each location is unique, and some services might be provided while others require further urban development.

The annexation negotiation process between The City of Calgary and the Municipal District of Rocky View began in October 2002. A series of initial open house events were held in November 2002 for landowners and the general public.

The joint annexation mediation committee held 37 meetings September 2005 - October 2006. On October 16, 2006, City Council authorized Administration to finalize the annexation agreement and apply for annexation to the Municipal Government Board (MGB).

As a result of the ongoing mediation along with information and feedback received from citizens, both Councils (MD of Rocky View and The City of Calgary) considered a new proposed agreement in their respective meetings on Monday, June 12, 2006. The MD of Rocky View Council approved the annexation agreement on November 7, 2006. The annexation agreement was signed by the Mayor and the Reeve on November 24, 2006 and the Annexation Application was submitted.

The MGB held a week of hearings beginning on March 26, 2007. The MGB reviewed the application and presented its report to the Minister of Municipal Affairs & Housing. The Minister further reviewed the report, and then took it to Cabinet for its decision, resulting in the approval of the annexation agreement, as recommended by the Municipal Government Board.

Annexation is a provincially-legislated process governed under Municipal Government Act. Lands are transferred from one municipality to another to accommodate future urban growth and development. The new municipality provides services and their regulatory authority to protect public health and safety.

How is land annexed in Alberta?

Why did The City annex these properties?

The 2007 annexation helped ensure key elements of The City’s long-term growth requirements, strategic interests and future opportunities were achieved, including:

Calgary annexed approximately 103 square kilometres / 25,000 acres of land from Rocky View County. Annexation remains one of the primary means by which our city has grown, see the History of Annexation Map for an overview of Calgary’s growth.

What value does annexation bring Calgary and landowners?

Annexation of land does not mean immediate development or urbanization. Development and urbanization are a product of inputs such as planning, servicing and market demand. The City has a well-developed process to realize development in locations that are or can be serviced with high-quality urban infrastructure such as transportation, safety, and utilities.

As development and urbanization takes place, residents and businesses are further exposed to a wide range of services not offered by rural municipalities.

Municipal property taxes enable The City to deliver services such as Police, Fire & Emergency Response, and roads, but it also helps pay for other things, including social programs, and recreation facilities.

User fees services, such as water, wastewater, and waste & recycling, are provided as lands are further developed or where services can be provided logistically while remaining fiscally responsible. Learn more about all our City services and programs.

How does Calgary plan for future growth and development?

The Municipal Development Plan (MDP) and Calgary Transportation Plan (CTP) are The City’s long-range land use and transportation plans that look 60 years into the future. The Plans help shape how the communities we live and work in grow, develop and evolve over time. The MDP and CTP were updated in 2020 as our city continues to change and grow.

The City has also begun a process to consult with local community members and businesses to plan for future development at the community level through the Local Area Planning process. The City currently has over 200 policy documents that guide local area development and redevelopment within the city. The Local Area Plan process anticipates revisiting those 200 policy documents and implements approximately 42 local area plans, which will direct where and how we develop the city within its current boundaries. This process is anticipated to be approximately a ten-year-long process and will generally begin in areas within the inner-city and work outwards towards the municipal boundaries. Our long-range plans make sure City staff, communities, developers, business owners, citizens and Council are working together to build a great city. Learn more about Planning for Calgary’s future.

Why is the municipal tax rate for properties annexed in 2007 now changing in 2022?

Why were the Rocky View Municipality tax rates maintained for the past 15 years, and were landowners consulted?

Per the LAND AND PROPERTY RIGHTS TRIBUNAL (alberta.ca) procedures, The City negotiated with Rocky View County regarding the lands proposed to be annexed in 2007. This included consulting with landowners on the future assessment and taxation of annexed lands. The assessment and taxation scheme is legislated to ensure fairness in the taxation of property. The City and Rocky View County explored various options with landowners to mitigate the financial and potential tax impacts of annexation. This included maintaining the Rocky View County tax rate for 15 years, which was later added to the conditions of the annexation and confirmed by the Lieutenant Governor in Council in 2007.

How does The City put municipal property tax dollars to good use?

Review all tax-supported and user-fee City services and programs at calgary.ca/services. Learn more on calgary.ca/ourfinances.

Is Calgary’s residential property tax competitive with other major municipalities in Canada?

In 2020, Calgary had below-average residential property taxes relative to a cross-section of major Canadian cities and regional neighbours for a representative two-storey house.

The City measures its performance relative to other Canadian cities and uses this information to help identify where we are doing well and where we can improve. We also monitor how we compare against international cities based on various world ranking studies throughout the year. Learn more about how Calgary compares to other municipalities.

How are annexation properties valued?

Properties are valued based on the provisions of specific annexation orders. For the 2007 annexation order No.333/2007 (MD of Rocky View to The City of Calgary), The City has been preparing property assessments for these annexed properties since 2007 to help determine their share of property taxes. Assessments reflect the market value for properties as of July 1st, and the characteristics and physical condition of the properties as of Dec 31st of the year prior.

Property owners can visit calgary.ca/assessment to learn about the assessment process or contact assessment during the Customer Review Period which runs from January 5 through March 14, 2022 should they have questions about their assessment.

Do these properties currently receive a City of Calgary property tax bill?

Have these properties been benefiting from City services and programs since 2007?

The City provides services and programs to annexed properties where logistically and financially feasible. Each location is unique, and thus some services or programs might be made available while others are not.  For example, Water Services are not paid for by property taxes, but rather are 100 per cent funded from the rates paid by customers.  Typically, Water Services come online in new areas once significant development has occurred and there is the necessary funding to pay for the needed capital investments in water and wastewater infrastructure.  At present, The City’s water, wastewater or stormwater services have not been extended to all areas as there isn’t sufficient funding.

Property owners are encouraged to contact 311 to connect with the appropriate business unit to discuss any specific service request or program.

Who can property owners contact about a City service or program?

Property owners can contact 311 for questions about City services or programs. 311 will create a Service Request and route the inquiry to the most appropriate business unit to address the property owners’ questions or concerns.

How has The City created awareness with these property owners?

The City contacted impacted property owners with direct mail in 2021 October, in addition to using social media, web and 311 channels to create awareness of the tax rate change and benefits of City services and programs.

For properties currently participating in TIPP, when is the first adjusted withdrawal set to come out of participants’ accounts?

The City property tax rate will be used to determine an owners share of property tax that will be reflected on their May 2022 Property Tax bill. Those participating in The City’s Tax Instalment Payment Program (TIPP) will see their monthly instalments revised in 2022 July to ensure their tax account is paid in full by the end of 2022. The revised instalment amount can only be applied after the Provincial Budget is released and after Council has approved the Property Tax Bylaw in 2022 spring.

Does The City offer any programs to assist residential property owners in need?

Residential property owner experiencing financial hardship, regardless of age, may be eligible for a credit/grant of the increase on your property tax account. To learn more about the eligibility of this program, please visit Property Tax Assistance Program (calgary.ca).