In 1884, Calgary was incorporated as a town with a population of over one thousand people. By year's end, it boasted its first newspaper, some thirty major buildings, and a healthy economy based on farming and ranching.

One of the first tasks of the new council was finding land for a Protestant cemetery. The only existing graveyard was at the Roman Catholic mission and it was clearly inadequate to meet the future needs of a growing city.

So in 1885 city councillors chose a plot of land of about fifty acres at Shaganappi Point; a beautiful spot overlooking the river valley which is now the site of the Shaganappi Golf Course. The first burial in this new cemetery took place in September of 1885. Unfortunately, back in the 1800s graves had to be dug by hand and it wasn't long before rocky soil conditions at Shaganappi Point forced council to seek another location. In 1890, a hill to the south of the city at 28 Avenue and Spiller Road S.E. was chosen as the site for the new cemetery, Union Cemetery. The cemetery at Shaganappi Point closed soon after. The process of moving the burials from that site to the new Union Cemetery finally began in 1892 and was completed by 1912.

In 1890 Union Cemetery was established on a hill to the south of the city.

When Union Cemetery was established in 1890, the cost of a single plot was five dollars, a double plot was ten dollars, and the charge for digging and closing was two dollars. These were significant amounts at the time - especially since the new burial ground could hardly be called convenient. No bridge existed over the Elbow River so funeral carriages had to lurch up and down steep banks and slosh through fairly deep and hazardous water. Pedestrian mourners had to wait until a ferryman rowed them over, a few at a time. And don't forget that Calgary's weather was as unpredictable then as it is today - something that was eventually recognized in 1909, when a mortuary chapel was built to store sealed caskets for the winter.

In 1912, The City erected a sandstone arch in Union Cemetery to act as a grand entrance to this important civic space, directly off MacLeod Trail at 25th Avenue S.E. As Calgary continued to develop, MacLeod Trail was widened and the LRT was constructed. The sandstone arch was moved from its original location. In 2005 the arch was re-located closer to Reader Rock Garden to increase its visibility as well as to preserve its historic integrity. It is now positioned at the pedestrian entrance to the cemetery grounds.

The Calgary Heritage Authority deemed Union Cemetery to be a historically significant cultural landscape that played an important part in the settlement and establishment of Calgary as a city.

Union Cemetery remembers the famous and the not so famous in its chiselled history with more than ten thousand graves telling their silent stories. Here, you'll find the last resting place of pioneers and settlers whose names are synonymous with Calgary including: 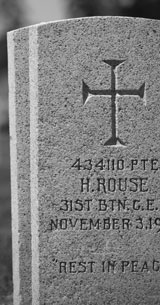 While sandstone has withstood the test of time as a building material, monuments made from it have not fared as well. The deteriorating sandstone memorials in older areas of Union Cemetery has made some unreadable; and others are so badly worn that their original shape and design are lost forever. It was the sight of these eroding memorials, which prompted Pauline Kearns Ashley and Mary Kearns Trace to begin recording Union Cemetery gravestones in 1986. Their meticulous work, Monumental Transcriptions of Union Cemetery, Calgary, Alberta was complied with every effort to maintain accuracy. Copies can be accessed in The City of Calgary Corporate Records, Archives or in the Local History Room of the Calgary Public Library. Burial registers for Union Cemetery are also available in the Archives.

If you are interested in finding out more about Union Cemetery’s history please join us for one of our historical summer tours.​​​