Green Line is an investment in Calgary

The Green Line LRT is the largest infrastructure project in Calgary’s history. With $4.9 billion in commitments from the Government of Canada, Government of Alberta and City of Calgary, Green Line will play a vital role in shaping our city’s future. From kick-starting our economy with 20,000 jobs to connecting people and places to reducing congestion on our roads, Green Line will help build the Calgary of tomorrow.

Stage 1, which was approved on June 16, 2020, includes track and stations from Shepard (126 Avenue S.E.) to 16 Avenue N., including BRT improvements in North Central Calgary and a Maintenance and Facility Station at Shepard.

Construction of Segment 1 - Shepard to Ramsay/Inglewood

Construction of tracks and stations for segment 1, Shepard to Ramsay/Inglewood, will begin in 2021. The initial Request for Proposals (RFP) for segment 1 was released to market on July 24,2020.

After significant engagement with the provincial government following their review of the Green Line LRT Project, we believe it is necessary to pause the current segment 1 procurement. It is not uncommon for mega projects, such as the Green Line LRT, to continue to be evaluated and adjusted if needed, given the period of time required for completion. New timelines for segment 1 will be released once the discussions with the provincial government are completed.

Once the first stage is complete, the line will be expanded incrementally to the north and southeast as additional funds become available.

Property owners that could be impacted by the future Green Line LRT route have been contacted by The City through a series of letters since March 2016. Future stages projects are in an early design stage and exact property impacts are still being refined. In most cases only a portion of a property will be required to accommodate the Green Line, however there are some instances where a full property will be required. As we move along in the design phase these property impacts will become clearer.

Read our FAQ for more information on the property acquisition process for Green Line.

Approved in 2017, The Green Line LRT extends from Seton S.E. to 160 Avenue N. and will provide improved mobility options for Calgarians in the north and southeast of the city.

This $4.9B investment in our City will be built in stages as funding becomes available. Stage 1 will begin construction in 2021. 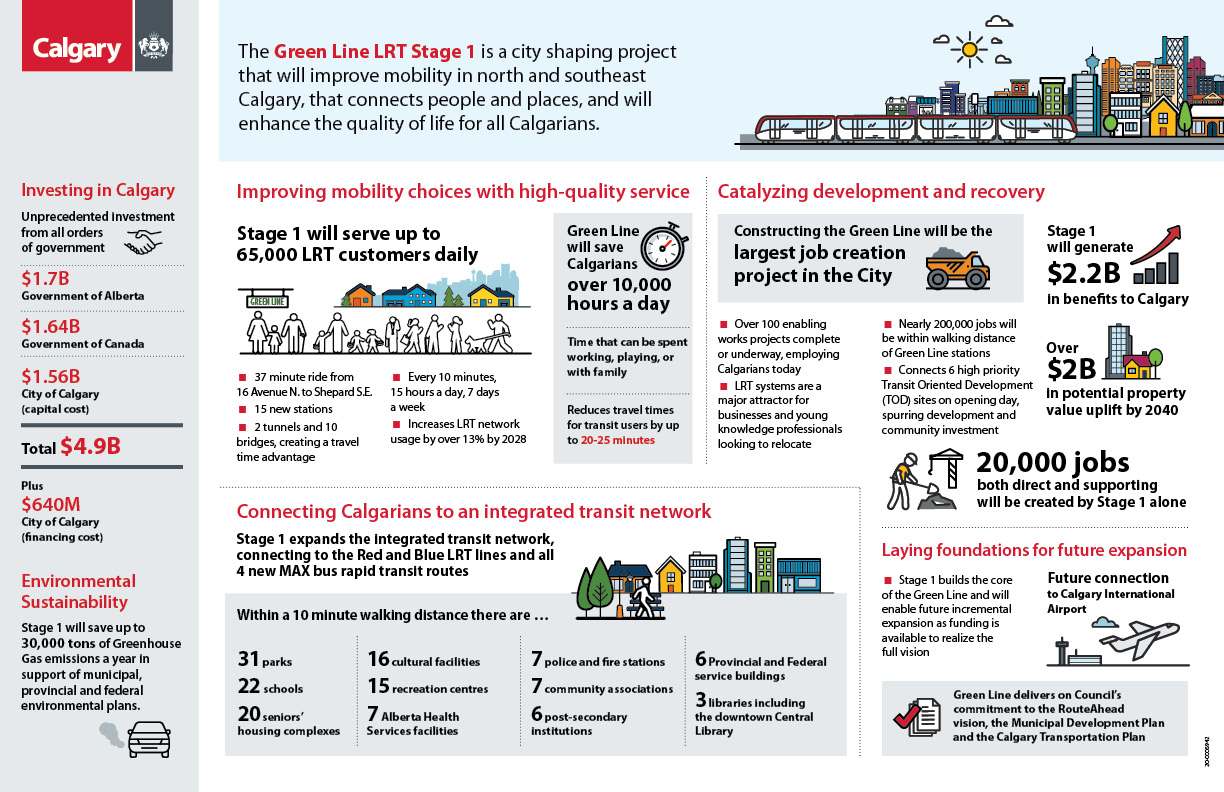