Gian-Carlo's mother was born in Calgary's Ward 9 in 1940 and his father was the first child of Italian immigrants to New York City. An English teacher and professor of piano at the Manhattan School of Music respectively, his parents spent their summers in Calgary.

During Gian-Carlo's summers in Calgary, he would ride through Inglewood with his siblings and enjoy family camping trips into the mountains. The obvious differences between New York and Calgary, the similar challenges in both cities and the powerful lessons of scale that he learned traveling between the two by passenger train helped shape Gian-Carlo's understanding of the world.

Graduating in New York City from LaGuardia High School in 1990, Gian-Carlo took another grade twelve year at Calgary’s Western Canada High School, matriculating into the University of Calgary in the fall of 1991. He went on to earn his BA in History (1996) with a concentration in North American social, political and economic history. He has also been a leader in the Calgary competitive ultimate touring scene, coaching Calgary's first junior team to a national championship in 1997 and taking first ever Junior Ultimate Team Canada to a bronze medal at World Championships in 1998. By 1999, having traveled extensively and worked in a variety of industries including construction, restaurant and hospitality, Gian-Carlo was ready to pursue a career.

In 1999, Gian-Carlo took a course in urban design theory from the Faculty of Environmental Design at the University of Calgary. Always concerned with the interaction between human societies and the physical environments, urban design changed Gian-Carlo's life. A frequent contributor to that urban design theory class was Calgary planning legend Harold Hanen who mentored Gian-Carlo, encouraging him to pursue a professional path dedicated to helping Calgary become a great city. In the fall of 2000, Gian-Carlo began his Masters in Environmental Design / Urban Design and at the same time began his service to the Inglewood Community Association. Gian-Carlo's career as an award-winning urban design professional and as a community activist has been shaped by his fundamental belief in the principles of design-based civic engagement.

Gian-Carlo is married to Barb Carra, whom he met in 2003 playing ultimate frisbee at the University of Calgary when both were finishing their master's degrees. A three-year long distance relationship followed as Barb moved to Ontario to do her PhD in data analysis and spatial statistics, working with Alberta’s Foothills Research Institute Grizzly Bear Research Project. Married on July 21, 2007, Barb completed her PhD and now works for Cybera, a not-for-profit technology research agency. Barb and Gian-Carlo are the super-proud parents of an amazing little guy named Vance Urbano, who was born in 2012.​​ 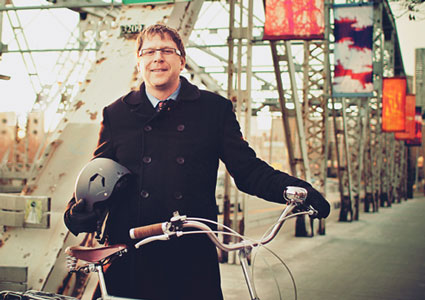