Source water is an important resource for The City of Calgary and surrounding areas. Protecting source water is the first line of defence to minimize the risk of contamination to our drinking water.

Much of the source watersheds that supply Calgary's drinking water remain relatively pristine. It is important to The City of Calgary as well as the broader region that we protect our source water to supply clean, safe, reliable drinking water to our customers.

Source water: Water in its natural or raw state, prior to being withdrawn for treatment and distribution as a drinking water supply.

All municipal utilities draw their water from a source environment. For the City of Calgary, this includes surface water in the Bow and Elbow river systems. This water is ultimately generated by the source watershed, which includes all lands from which water collects and flows downstream to the municipal treatment plans.

The City of Calgary has two watersheds associated with each of its two drinking water plants:

These two watersheds include lands governed by the federal, provincial, municipal and First Nations governments. As The City lacks direct jurisdiction and control over land and water use outside of its boundaries, effective source water protection requires close cooperation with upstream stakeholders and partners

Some of The City's source water is also located within city limits. It is important that we protect watersheds within city limits as well as those outside of Calgary. The highest risks have been identified as stormwater runoff from land development and transportation systems, and widespread wildfires on forest lands or grasslands. 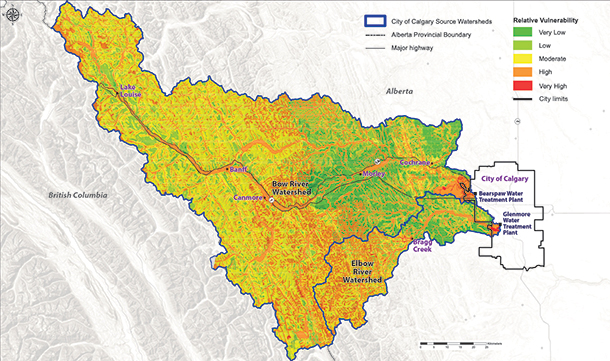 Proactive source water protection with management actions, partnerships, and stewardship can provide a wide range of economic, social, and environmental benefits. Expenditures to protect source water such as riparian and wetland restoration, can be more cost effective than building and operating more advanced treatment facilities.

By protecting our source water, we are taking steps to ensure we have reliable, clean water for current and future generations