I want people to feel like they can always communicate with me. Counciltalk (formerly Aldertalk) is a powerful tool in my strategy for ensuring that they can. It has become quite popular since its inception, even gaining the attention of the Southern Alberta Institute of Technology’s news publication "The Press" in their article on Counciltalk

In the past, there have been three ways for citizens to meet in person with a City Councillor:

Counciltalk is my low-cost solution to these less than ideal methods. It is held about seven months out of the year, and rotates location between communities in Ward 14. People only have to go as far as their local community hall on a Saturday afternoon to speak with me, but have been known to travel much further. Residents who attend are ensured a chance to speak to me personally about whatever concerns them. We sit in a round-table configuration and go through each attendee individually to hold discussion on their topic of choice.

On January 14th, 2012 a group of Ward 14 Residents gathered at Parkland Community Hall to engage in thoughtful discussion. It was my first attempt at this new way to engage with Ward 14 residents. Since then residents of Ward 14 have been joining me regularly to engage in meaningful dialogue. The concept has even been imitated by other Councillors! 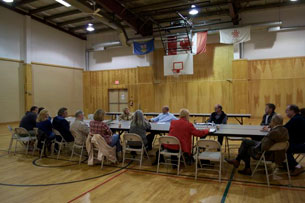