By the time March is over the seasons will have changed, and you might also say the way the City of Calgary deals with secondary suites is entering a new season.

On December 11, 2017 - with a new Council in place - some major changes were made to the way we approve secondary suite applications in a 10-5 vote. Councillors Carra, Chahal, Colley-Urquhart, Davison, Farkas, Farrell, Gondek, Keating, Woolley, and Mayor Nenshi were in favor. Councillors Jones, Magliocca, Chu, Sutherland, and Demong were opposed.

Officially, they directed administration to include secondary suites as a discretionary use in R-1, R-C1, and R-C1L land use districts. Effectively, this will eliminate the need for secondary suite applications to be voted on by Council, leaving administration to decide their fate. Moving forward a homeowner would go straight to the development and building permit stages.

But these changes must be officially put into the City’s Land Use Bylaw, and a public hearing must be held before the decision is finalized. You may have received a letter about this in your mail. Your chance to speak is on March 12 in Council Chambers, and you have until March 5 at noon to submit written comments, whether for or against.

These are BIG changes that will impact the entire City, so I encourage you to visit calgary.ca/secondarysuites for more details, and all the information you need to submit your comments.

The topic of how we deal with our waste is one of my favourites because of how inconspicuously it has such an enormous impact on our lives, and just like secondary suites there have been big changes in our Waste & Recycling Department over the last year.

We all have our green bins now. I have no doubt that its addition was the right thing to do for the future of this City. Not only does the program divert organics from landfills, it allows us to divert much of our sewage too (one day I will use this column to go into much more detail about that).

For many - just like me - the new green cart has been a bit of an adjustment (the site calgary.ca/whatgoeswhere is a great resource for that), and I also have no doubt that the City will have to make some adjustments to this service before all is said and done. Unfortunately, there is one adjustment - already on its way - that I must inform you about. We will have to start paying for our green bins soon.

You will start seeing the fee after April 1st. This wasn’t originally the case though. The City planned to start billing all of Calgary for this service on January 1, but the actual service was to have a staggered start based on quadrant. Green bin service was to start in the southwest in July 2017, but not start in the southeast until October. Fortunately, Councillor Keating and I were able to pass a Notice of Motion to balance this inequity. You can read about it here.

With blue bins having been introduced years ago, and multi-residential buildings now recycling too, there is much less use of the community recycling depots around Calgary. In fact, we are now collecting less than one quarter of what we once did at these depots. Accordingly, the City has closed nine of them.

Ward 14 remains untouched by these closures, although if you were using the Bridlewood or Douglasglen community recycling depots you will have to find a new place to go. Luckily, there are still locations at Millrise, Shawnessy, Ogden, and South Trail, or you could just use your blue bin...

You can see all the active locations at calgary.ca/recycledepot. 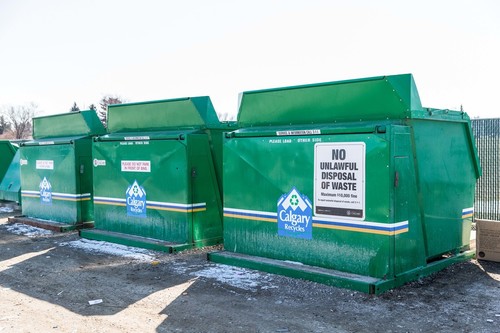 Obviously green and blue bins have had an impact on our daily lives, but our waste and recycling system has recently been impacted in other ways too. Alberta’s economy over the last few years has led to a noticeable decrease in tipping fees at landfills, and a corresponding decrease in their operating budget.

Some of my colleagues and I have been working behind the scenes to make this a little more manageable for those of us in the south. The Throw n’ Go facility at Shepard will be open beginning on April 1st through October when we will be revisiting the whole schedule again.

To get full details about landfill schedules visit calgary.ca/landfill.

You may not like the landfill hours. You may question why we need green bins. You might be unhappy with secondary suites, and you may want to let your Councillor know how you feel about these things. That is why there is Counciltalk.

The first ever Counciltalk in Douglasdale was great. Thanks to those who showed! March’s Counciltalk is coming quick. We will be at the Southview Church in Walden (20200 Walden Blvd SE) on March 3 between noon and 2 p.m. I hope to see you there, but if not you can see the rest of the 2018 schedule at calgary.ca/counciltalk.

If you didn’t already know, you should not hesitate to contact me anytime. Have a great month!