Annie Gale, the first female alderman in Calgary and Canada

A "very conservative woman, not particularly interested in women’s suffrage," became our first female alderman—and the first in Canada.
​​​

For a self-described "very conservative woman, not particularly interested in women's suffrage," Annie Gale (1879–1970) is paradoxically remembered as a consumer advocate, social activist, and pioneering female politician of international significance. To her biographer, Judith Lishman, Gale was “one of the finest citizens that Calgary has ever had.” Her storied career has many links to City Hall.

She was born as Hannah Rolinson to an Anglican family in Worcestershire, England, in 1879. In 1912, she moved to Calgary with her husband, civil engineer William John Gale, and their two sons. Before long, William joined The City’s Engineering Department, and he eventually became assistant city engineer.

The conditions that Annie found in boom time Calgary compelled the reluctant activist to take action. Calgary merchants held contracts with British Columbia growers, and they would not sell vegetables produced by local farmers. Shipping vegetables over the Rocky Mountains resulted in expensive produce of poor quality, but local merchants did not want to break their established contracts. When the Women’s Consumers' League was formed to combat the alliance between local merchants and out-of-province growers, Annie was quick to join. Local business owners initially resisted this interference. Eventually, after all attempts to thwart the Consumers' League had failed, they relented and started buying from local farmers. When the Calgary Public Market was established at the northeast corner of Third Street and Fourth Avenue E., the Consumers’ League set up a stall of produce produced locally with cost savings passed on to the consumer. 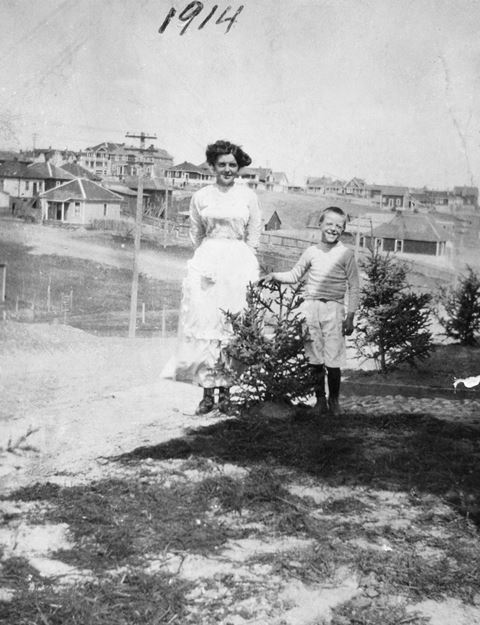 In 1914, Mrs. Annie Gale and her son Bill pose beside their home at 1717 27th Avenue SW. Courtesy Glenbow Archives.

Another group was also working to show that Alberta could grow produce as well as British Columbia. The Vacant Lots Garden Club, which kept its offices in City Hall, was founded in 1914 to increase production of vegetables during the war. Its motive of growing food locally appealed to Annie. Club members’ most popular crop was potatoes, and in 1917, there were over 6,000 potato plots alone. The oldest existing community garden that was part of the Vacant Lots Garden Club is in operation today, still being used for its original purpose. Located in Bridgeland/Riverside at 46 7 Street NE, the three-lot garden dates back to 1924 and was designated a Municipal Historic Resource in 2008.

The Consumers' League held a potato luncheon at the Palliser Hotel to reinforce the notion that successful vegetable crops could be grown in Alberta. Annie also organized an auction of flowers that had been grown on the vacant lots and made $800 for the Patriotic Fund. R.B. Bennett (1870–1947), Calgary’s Conservative Member of Parliament (and Canada’s future prime minister) was the auctioneer.

As Annie's public reputation grew, it seemed inevitable that she begin to be considered for public office. She was nominated for the 1917 civic election by notable Calgarians such as Bennett, Anglican Bishop William Cyprian Pinkham (1844–1928), pioneer female magistrate (and wife of former mayor R.R. Jamieson) Alice Jamieson (1860–1949), and Bob Edwards (1864–1921), publisher of the Calgary Eye Opener. The Federated Ratepayers' Association, a group set up to promote progressive civic ideas, endorsed her. The 1917 election was the first using the proportional representation system, which City Clerk John M. (Jack) Miller (1887–1967) had devised and implemented. Annie came in sixth of the twelve aldermen elected. This made her the first woman in Canada, and possibly in the British Empire, to be elected as an alderman.

As alderman, Annie continued to support the public market, but she met resistance from fellow councilors who felt that there should not be public involvement in the food business. Annie realized that, unless more women held public office, business interests would always win out over the public welfare, such as the matter of equitable food production. Her views on equal job opportunities for women extended beyond elected office; she also supported the idea that women would be capable of taking on manual labour roles in the Parks Department. Fellow councilors met this suggestion with disdain.

Annie sought to reform public health matters in the city, and she felt that the province was indifferent to their needs. She thought that hospitals should be under the control of local authorities, and she took great pride in the passing of a hospital plebiscite in 1918. Annie was often in conflict with public health officials over matters such as public disease outbreaks or improved standards in food and dwelling inspections.

Before she left city council in 1923, Annie became the first woman in Canada to serve as an acting mayor. The 1924 municipal election put her back in City Hall, but this time as a Calgary School Board trustee rather than an alderman. She was elected under the campaign promise of reinstating the clinic policy in which the school board paid for eye, nose and throat operations for children with a nominal cost of $5 from parents. Her attempts to reinstate the policy were unsuccessful, but she was undaunted and was planning meetings to discuss the matter further when she suddenly left for Vancouver to take care of her husband’s health in May, 1925. An initial three month leave of absence became a permanent departure, as the family resettled permanently in Vancouver, creating a political and social void in Calgary.

Annie Gale remained in Vancouver until her death in 1970 at the age of 93. By that time, many of the reforms for which she had advocated had been realized. She may have been in Calgary a brief twelve years, but she showed herself to be a woman well ahead of her time. In 1983, over a dozen years after her death, Annie Gale Junior High School opened in the city’s northeast Whitehorn district.