Built between 1907 and 1911 and designed by architect William Marshall Dodd, this splendid example of the Richardsonian Romanesque style of architecture is, in fact, the oldest surviving extant City Hall in all of Western Canada. Richardsonian Romanesque is an architectural style popularized in the eastern United States in the late 19th century. The name derives from Henry Hobson (H.H.) Richardson, the Beaux-Arts trained architect who had studied and was influenced by the Romanesque style he saw in Europe. The Romanesque style derived its elements from Roman antiquity, such as the semi-circular arch capped with a keystone. Back home in the U.S., Henry Hobson’s own style was an adaptation of this Romanesque style. By the time Calgary’s city hall was being designed around 1907-08, the style had finally reached Western Canada and had become associated with grand public buildings. 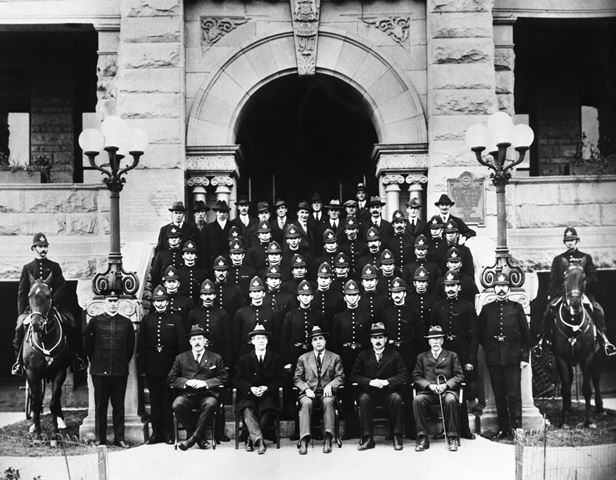 Specific architectural elements of Historic City Hall that are associated with Richardsonian Romanesque style including its use of heavy rough-faced masonry, its massive volumes and heavy piers, the pronounced use of curves such as the round-headed window bays and the semi-circular arch at the front entry, and the textured red roof and large dentil mouldings. 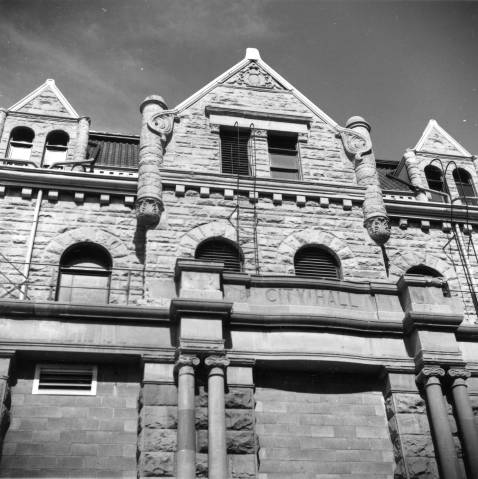 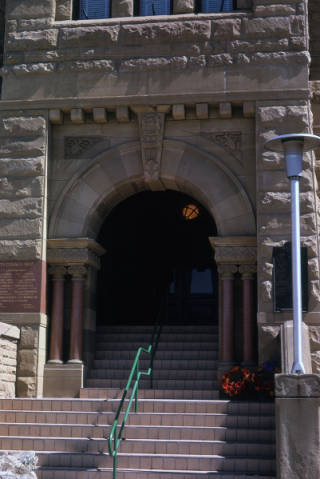 The Architectural Features that make the building a recognizable Civic Landmark, 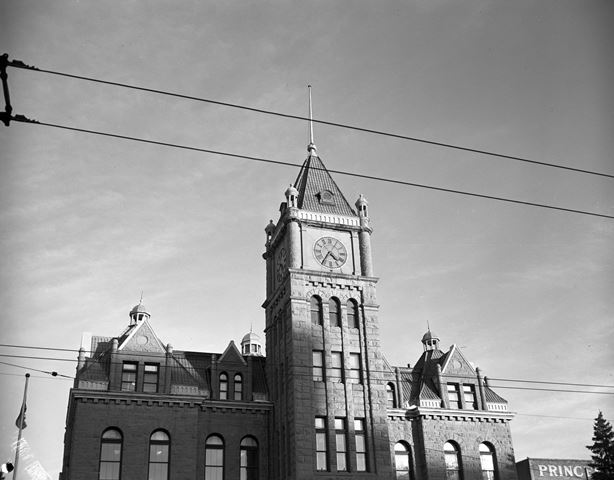 These elements are related to historical, social, and emblematic values the building and its site have acquired over time.

(For these and other definitions see American Architecture – An Illustrated Encyclopaedia by Cyril M. Harris. W.W. Norton and Company: New York. 1998)

Blind oculi – (oculus) A small circular window or panel, especially an opening at the crown of a dome. ‘Blind’ refers to it as permanently closed.

Cornice – Any molded horizontal projection that crowns or finishes the top of a wall where it meets the edge of the roof; sometimes ornamental.

Cupola – A structure on a roof or dome, often set on a circular or polygonal base at the ridge of a roof or set on pillars; often glazed to provide light in the space below or louvered to provide ventilation in that space.

Mansard roof – A hipped roof usually having a double slope or compound curve on all four sides of the roof, the lower slope often being much steeper than the upper slope; alternatively, the sides may have a concave, convex or S shape. Named after the French architect Francois Mansart (1598-1666). Found for example in the Beaux-Arts, Richardsonian Romanesque and Second Empire Style.

Parapetted gable dormers -  A parapet is a low protective wall or similar barrier at the edge of a roof, balcony, terrace, or the like: often decorative. A parapeted gable has a face that rises above the roof line and carries a parapet. A dormer is a structure projecting from a sloping roof, usually housing a vertical window or louvers.

Post and Finial – A post is a strong stiff vertical structural member or column, usually wood, stone or metal, capable of supporting a framing member of the structure above it. A finial is an ornament that terminates the point of a pediment, pinnacle, spire or the like.

Plinth, Ionic columns, smooth Entablature – A plinth is a square or rectangular base for a column, pedestal, pier or pilaster. An iconic column refers to one of the five orders in Classical architecture, originated by the Ionian Greeks. The topmost part of the column (called the capital) consists of 2 large curved volutes. An entablature is an elaborate horizontal band and molding supported by columns.

Rock-faced stone, smooth dressed – Rock-faced is a term descriptive of the rough face of stone as it is spilt at the quarry and squared off only along the edges. Smooth dressed refers to stone that has been machine processed.

Voussoir – one of a number of wedge-shaped masonry units that form an arch or vault.