The Sien Lok Society of Calgary was formed in 1968. Embodying the motto behind the name Sien Lok that "happiness comes through good works" the Society, in co-operation with the community, preserved and developed Chinatown's lone green space into Sien Lok Park in 1982.

The sculpture titled "In Search of Gold Mountain" was sculpted by Chu Honsun from 15 tonnes of granite from Hopei Province in China. It was sculpted to honour the Chinese history within Canada.​​​​​​​ 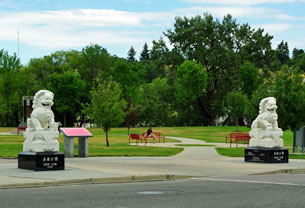