Tom Campbell's Hill Park overlooks the Bow River in the northeast part of the city. The park was created in 1991 and occupies about 18 hectares. The name originates from a large sign that stood on the hill for many years advertising Tom Campbell's Hats.

The park has a small, but good example of Rough Fescue Grassland, which is one of this area's major ecosystems. Aging poplars provide plenty of dead wood for woodpeckers and other birds looking for invertebrates. The park features an interpretive exhibit about the park's history and the grassland ecosystem. From the exhibit, there is an excellent view of the city skyline.

Much of the native grassland has been invaded by Awnless Brome, a species which left unchecked, could eliminate the Rough Fescue. You can also find native flowers such as Three-flowered Avens and Moss Flox. Some time ago, a double row of Northwest Poplars was planted creating a "grand allee" leading to the exhibit and overview of the city.

The aging Northwest Poplars provide the ideal habitat for insect eating birds, particularly Downy and Hairy Woodpeckers. The short and well-trampled grassland is home to a small mammal that's becoming increasingly difficult to find in the city, the Richardson's Ground Squirrel.

Grasslands are home to many species of invertebrates, but the ones you are most likely to spot here are the butterflies. In June and July look for Inornate Ringlets. Throughout the summer you can check for Checkered Skippers.

The hill was originally used by Europeans as ranch land, and for a short period, as home to many exotic species from the Calgary Zoo. Following its use as a zoo pasture, a proposal was made to convert the area to an industrial park. This proposal was strongly opposed and the area was changed from an industrial park to a natural park.​​​​​​​​​​ 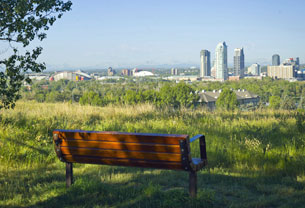 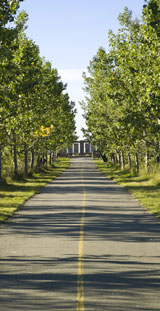