Edgemont Ravine was so named because the network of ravines in northwest Calgary are completely surrounded by the community of Edgemont.

Note: The City of Calgary Parks is repairing and upgrading a section of pathway in the Edgemont ravine, south of Country Hills Blvd N.W., between Edgepark Blvd. N.W. and Edgebrook Blvd. N.W. This work is required as part of routine pathway life-cycle and involves removing and replacing asphalt.

The network of ravines in the northwest section of the city are completely surrounded by the community of Edgemont. The naturalized marsh was one of the first to be constructed as part of the water management scheme in a community development. The community and park were established in the late 1970s. Access to the ravines is available through the parking lot on the east side of Edgebrook Blvd. N.W. 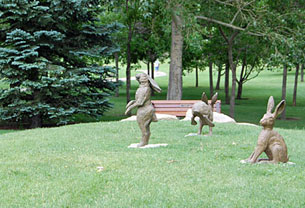 Listen for the echo of the sounds of the marsh off the slopes of a steep-sided ravine. Walk along the bottom of the ravine to see how the north-facing slopes hold dense stands of vegetation, primarily willows and aspen, while the dry south-facing slopes are primarily grassland. The marsh is home to a wide variety of birds and other wildlife and the ravines are home to a large number of deer.

The ravines are quite steep, thus providing the growing conditions for a variety of vegetation such as Trembling Aspen, willow, grasses and many species of flowers. When the marsh was constructed, only native species were used giving you the opportunity to see Common Cattails and bulrushes.

The ravines also provide cover for many species of birds and other animals such as Gray Catbirds, Brown Thrashers, White-tailed Deer and Coyotes. The marsh is home to birds such as Red-winged Blackbirds and Common Coots as well as several species of waterfowl.

The ravines, forming part of the drainage system from Nose Hill, were carved by post-glacial runoff. Aboriginal people used the area for thousands of years and a number of archaeological discoveries were made within the park including a couple of campsites.

Europeans farmed and ranched the surrounding fields since early settlement times but because of their steepness, the ravines were left in their natural state. Since the establishment of the park, much of the bottomland has been disturbed by the regional pathway system. When the community was developed, The City identified the ravines as inappropriate for building and they were therefore set aside as an "Environmental Reserve" under the provincial Municipal Government Act. The constructed wetland was developed within the Environmental Reserve.​​​​​​​​​​​​​​​ 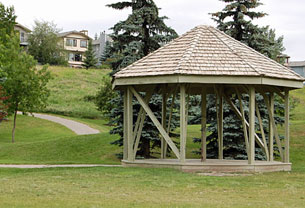