Sue Higgins Park, formerly Southland Park, lies along the banks of the Bow River in the southeast and is home to the largest fenced off-leash area in Calgary.

Find out more about planned improvements for Sue Higgins Park. 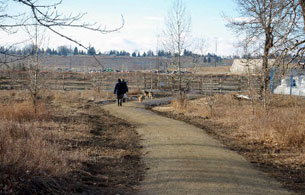 Sue Higgins Park lies along the west bank of the Bow River as it flows through the southeast corner of the city. The park consists of an island, river banks, flood plain and inland marshes. The park was established in 1994 and covers about 62 hectares. On November 19, 2012, Council approved the renaming of Sue Higgins Park from Southland Park.

The trees on the island and along the riverbank are primarily Balsam Poplar with a smaller number of Trembling Aspen. There is also an extensive tall shrub community including Spring (Water) Birch, and several species of willows.

The marshy areas contain typical stands of Common Cattails, sedges and rushes. The grasslands are primarily introduced Awnless Brome with a smaller area of native Rough Fescue. Interspersed in the grasses are a large variety of wildflowers. 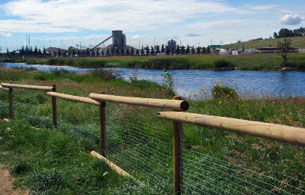 The fast flowing waters of the Bow River provide habitat for diving ducks, while the channels provide waters suitable for dabblers. The river is also often populated by large numbers of Canada Geese and several species of gulls. Beginning in the early spring the distinctive call of the Red-winged Blackbird can be heard around the marshes.

The tall trees along the bank are frequented by woodpeckers and warblers and several species of swallows can be seen patrolling the river. Inland, native sparrows are found in the grasslands, and the marshes are full of blackbirds and shorebirds. The introduced Eastern Grey Squirrel is frequently seen in the forest canopy.

A visitor may also hear the curious call of the Boreal Chorus Frog, which is described as the sound of someone running their finger along the teeth of a nylon comb. The number of wire-wrapped trees is ample evidence of the Beavers' presence. 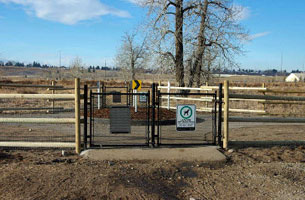