Weaselhead Flats is a 237 hectare natural environment park that borders the west end of the Glenmore Reservoir and connects South Glenmore Park and North Glenmore Park.

Weaselhead Flats lay at the mouth of the Elbow River in the southwest part of the city. The park was created in the early 1980s and occupies about 237 hectares. The origin of the name is uncertain but it is likely named after the Tsuu T'ina Chief Weaselhead who was in power at the time of European contact.

Delve into the only delta in the city. As the Elbow River flows into the Glenmore Reservoir it slows down, thus depositing sand and gravel creating a network of bars, channels and marsh areas. This type of habitat is called a delta and is host to a relatively unique array of plants and animals. Weaselhead Flats also contain one of the largest stands of coniferous forest in the city.

The dominant White Spruce forest is on the south shore but very impressive individual trees are found interspersed in the predominantly deciduous forest on the flats and valley walls. The more moist deciduous forest areas are primarily Balsam Poplar while dryer areas are Trembling Aspen. Also on the flats is an extensive tall shrub community consisting mainly of Sandbar Willows and Water Birch.

The diverse habitats allows for a correspondingly wide range of birds and other wildlife. In the open waters, look for Common Loons and Tundra Swans, species you are unlikely to see in other parks. The mud and sandbars are the haunts for shorebirds such as Lesser Yellowlegs and American Avocet.

The coniferous forest is home to both Red and White-winged Crossbills who specialize in feeding on cones. The mixed forests provide the opportunity to see all three species of hummingbirds, Calliope, Rufous and Ruby-throated, found in Alberta. The flats' proximity to the countryside provides the best opportunity to see Black Bears in The City's park system.

Along with the delta, the Weaselhead Flats contain a fast flowing river, the Elbow, which was once called the "Swift River". There are also "oxbow wetlands" which are formed when the river takes a shortcut, thereby isolating a bend. The bend is maintained as a wetland by spring flooding or rainfall. The cliff face on the north side provides an excellent view of the silts deposited on the bottom of "Glacial Lake Calgary", which covered much of this area at the end of the last glaciation.

The flats as we know them started developing in 1933 when the Glenmore Dam was created. Before becoming a park they were used by the military for training purposes. Evidence of this use, such as foxholes, are scattered throughout the park.​​​​​​​​​​​​ 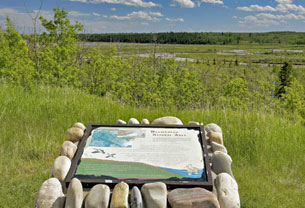 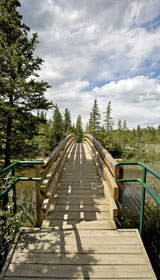