Before flood, after flood and flood repaired images of Stoney Trail pedestrian bridge

Many of our pathways along the Bow and Elbow rivers were hit hard by the raging waters during the 2013 flood. The event that June was devastating and since then, we have been working diligently to piece the broken pathway system together. Visit Flooding in Calgary to learn more about our flood recovery projects.

In some cases, there is no quick fix. There are unstable escarpments that pose a real hazard to citizens. Entire chunks of paved pathway have virtually broken away and no longer exist. The dynamics of the river has changed forever and as a result, some sections of pathway will need to be re-built from scratch and relocated.

What does this mean for those who commute to work by bike, enjoy walks along the pathway, or use the pathway for other forms of recreation? Unfortunately, it means that they may have to take an alternate route for a part of the commute. If the pathway requires a complete rebuild, it may take a year or more to allow time for design and rebuild.

In some sections of the hardest hit areas, Calgary Parks is facing several obstacles:

Alternative routes have been established where it has not been possible to immediately restore pathways to their existing alignment. If you come across a closure on a pathway or trail, the destroyed section may not be immediately visible, but could be located further along. In other situations, there may be unstable ground or other dangers that could be a hazard. Please obey all signage and take care and caution when using pathways in the city.

The following are some of the “hot spots” of the pathway system that will take considerable time to restore: 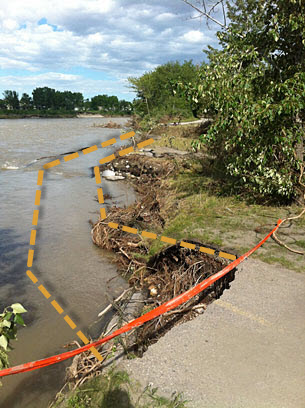 We recognize the value that citizens place on the Bow and Elbow River pathways, as both a place for recreation and as a commuter link into the downtown core. We appreciate your patience and cooperation as we rebuild and improve the safety of our parks and pathways. For more information please contact 311 or visit Flooding in Calgary. 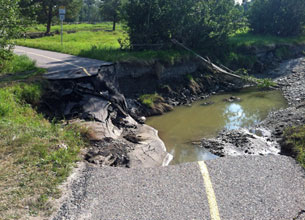