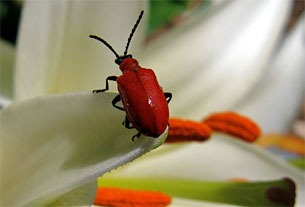 The red lily beetle - also known as lilioceris lilii, scarlet lily beetle and lily leaf beetle - are hungry insects that can devour an entire lily plant and pose a very real threat to our gardens and green spaces.

You can protect your yard and garden from the red lily beetle by taking the following steps:

Why is the red lily beetle a problem?

Originally from Europe and Asia, the red lily beetle has been in Eastern Canada since 1943, but it only recently reached Calgary.

Red lily beetles have a voracious appetite and can completely destroy healthy lily plants. Native lily and Fritillaria species, as well as ornamental varieties, are susceptible to red lily beetle infestation, but daylilies are not attacked by this pest.

Red lily beetle adults are strong fliers and, once established, will readily spread to wherever their host plant exists. These beetles are believed to be well adapted to the wild lily populations in this region. Garden centres, nurseries, home and landscape gardeners should be vigilant and inspect planted lilies and any bulbs in soil that are received from other areas.​​​