This is a video series for teachers of students in grades two through seven focusing on historic ​milestones in the last century of Calgary’s development. We designed the videos to complement existing topics in Social Studies, as they explore history, civic government and the characteristics of our communities. These videos were created in recognition of Calgary Planning Commission's 100th birthday.

The videos feature historic buildings, historic sites, and new developments which have made Calgary the vibrant city we see today. Our goal is to bring these city-building achievements to the classroom.

The video’s accompanying activities align with the Province of Alberta Programs of Study in Social Studies for grades two through seven. Embedded within the activities are strong connections to the Language Arts Program of Studies with emphasis on skills including listening, speaking, reading, writing and research. The activity exercises support an inquiry-based approach where teachers are looking at an essential question or idea such as legacy, beauty or identity.

Each video episode includes historical information about Calgary and works with the corresponding class activities listed below.
Videos 1 - 6

Debate and Deliberate
Investigate the redevelopment of Currie Barracks into Garrison Woods. If you could redesign your neighbourhood, what would you do?

Debate and Deliberate
Are old buildings worth saving? What is the current status of the Barron Building?

Compare our shopping habits to those of people in another country. What are the differences? Why do you think this is?

Debate and Deliberate
Investigate Calgary's Should Calgary continue to annex land from surrounding areas?  What are the alternatives?

Each classroom activity accompanies the video episodes. They are intended to assist teachers with guiding conversations about city planning.​

These questions may be used with children to help them talk about art, buildings and photographs.

Begin by taking a few moments to imagine that you are part of what you are looking at. Think about where you are in relation to the picture. Use all your senses to interpret your experience. 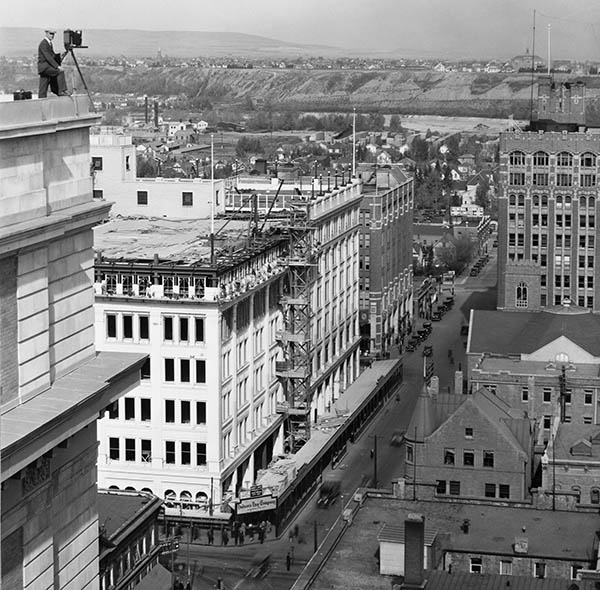 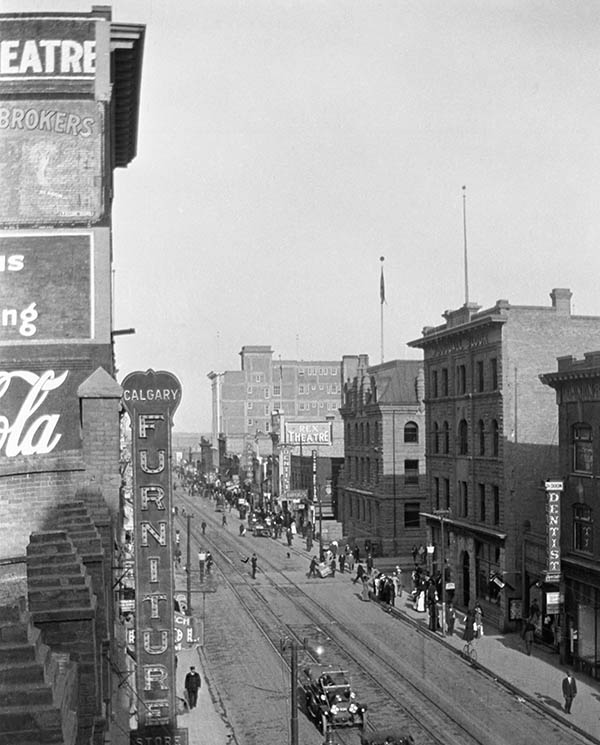 The questions above are adapted from the following sources:

This is an open-ended activity to encourage students to consider what makes a community and the issues inherent in its development and expansion. Discussion points can be approached in any order.

​As structures are added, encourage students to think about:

This can lead into the development of a “Block City” where students build a 3-D model of their community.

In this activity students will examine what their idea of a perfect society is and then design their own utopian city.

1. C​reate a mind map showing the relationships of a utopian society (teacher-led).

2. Imagine that you have been hired to plan and create an ideal city.

3. What are some of the problems that we face in our city today?

5. Consider the question, “What is beauty?”

Using a rubric, students are graded on their ability to add a personal voice; organize their work; employ appropriate sentence structure, flow and rhythm; focus on the topic, choose appropriate vocabulary, punctuation and grammar; and demonstrate a conclusion.

This activity may focus on the community where the students live, or could be directed toward the common community where students go to school. These activities can be modified to ensure grade-level appropriateness.

1. Write down everything you know about your community. Share this with a classmate or a small group. Create a class chart of common understandings.

2. Provide students with a writing journal and take them on a walk around their community. Allow time for student sharing following the excursion. Ask them to focus on the following:

3. Look at a map of your community to answer these questions:

6. Find out about events in your community by exploring local newspapers, community newsletters, the internet and signs posted in your neighbourhood.

7. Think about your community as part of the whole city. Consider the following activities:

Almost every day we leave our homes and head out to another destination. It may be to school, a friend’s house or to a store. When we are going from one place to another, how often do we really pay attention to the community that we live in?

Use the following “Inquiry Survival Guide” to research what makes Calgary a unique and successful city.

Over the last several weeks, you have been learning about Calgary’s early history, planning and development. You have practiced looking deeply at landmarks in the city and discovered new information about your own community. Now is your chance to really figure out what it means to be a Calgarian!

Use the following Inquiry Survival Guide to research a period of time in Calgary’s development that you believe was the most important in making our city what it is today.

When you are finished, you will have created a one- or two-minute video clip that will leave no doubt in the minds of your audience that your pick is, in fact, the reason we are who we are.

Timeline to guide the inquiry process

What steps do I need to take to begin this process?

1. Which period of time would you say was the most influential in Calgary’s history and how has it shaped who we are today.

There are many options for this trip, and you may choose to alter the sequence and/or the bridges visited.It is highly recommended to view fewer rather than more bridges in a single trip.

There are many options for this trip, and you may choose to alter the sequence and/or the bridges visited.It is highly recommended to view fewer rather than more bridges in a single trip.

Access
Memorial Drive on north side of the Bow River

Why that design
The Peace Bridge was designed by Spanish architect, sculptor and structural engineer Santiago Calatrava. The design follows strict requirements imposed by The City, with no piers in the water (to minimize the ecological footprint) and height restrictions (due to the vicinity of the Calgary City/Bow River Heliport).

How it works
The bridge gets its strength from a combination of the material (structural steel) and the use of the triangle, a very rigid shape. Beams attached at the bottom carry the load from the road to the trusses and they in turn to the pier and abutment.

Cable stay is a relatively new, popular design — a suspension bridge without anchors. The cables are strung from the tower to the deck.

Access
Buses are permitted to park at The City of Calgary parking lot next to the Calgary Curling Club on Memorial Drive.

Why it was built
To provide pedestrian access from the community of Sunnyside to Prince’s Island and the downtown core. With no existing pedestrian access on the lower deck of Centre Street bridge, a crossing was needed between 10th Street N.W. and Edmonton Trail.

Why that design
Cable stay design allows a 67-metre span over the Bow River that avoids the need for pier support. Pier construction in a waterway can be expensive and disruptive to the environment.

How it works
The steel cables support the roadway (deck) and transfer the load (force) to the top of the tower. The tower transfers this force into the footing (foundation). The footing (foundation) pushes back and holds the bridge stable. The cement piers are stationary and provide stability. 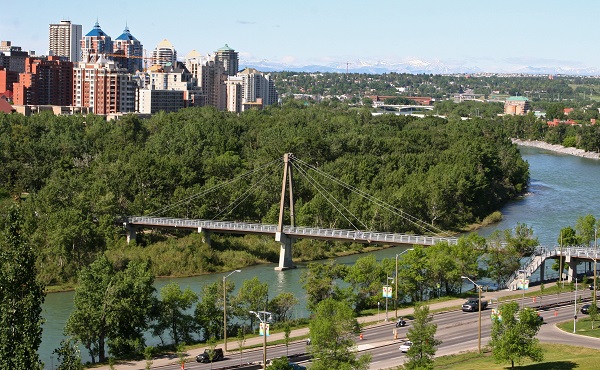 Why it was built
Built in 1906 (steel beams and wooden deck) to replace the ferry service, this was originally a privately-owned toll bridge. It collapsed in a flood and was rebuilt in 1916. It was renovated and restored in 2000.

Why that design
Discuss this with the students — reason unknown.

Material
Concrete bridge — Lions were originally sandstone. Where are these now?

How it works
Concrete arches provide support for both upper and lower decks. The weight (load) is transferred along the arches to large concrete piers (abutments). 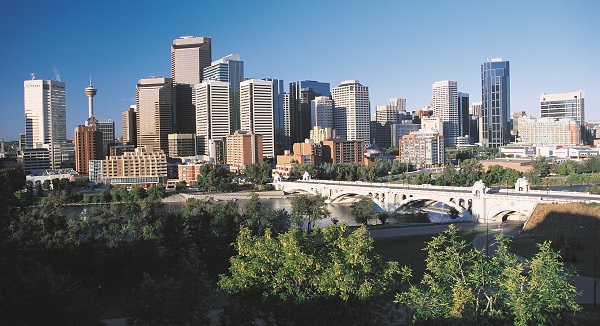 Access
Bus drop off is available at the Fort Calgary parking lot. As students walk to the bridge, they can look at the structure of the fort.

The bus can then pick up students along Sixth Street at Fifth Avenue.

Students can also check out the Inglewood truss bridge across the Elbow River. For information on truss bridges, see the section about the Reconciliation Bridge.

Why it was built
To connect the multi-use pathway with St. George’s Island.

Why that design
River piers are expensive to construct. By building a suspension bridge, the main span can be long enough to keep both piers on each bank of the river. Suspension bridges are very attractive and make excellent park or pedestrian bridges.

How it works
The wire rope hangers pick up the load along the span and transfer it to the suspension cables. These cables in turn transfer the load to the towers and to the anchors. The bridge is supported by the towers and by huge cables anchored to the ground. 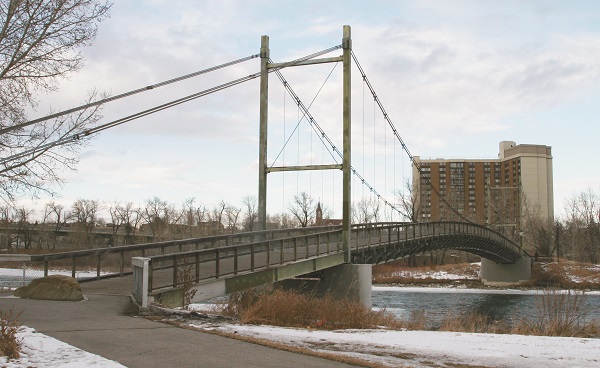 Why it was built
This bridge was originally built in 1890 from timber to serve the settlers that lived northeast of town. By the turn of the century the timber bridge had become run down from horse and wagon traffic.

Why that design
Popular in the late 1800s and early 1900s particularly with the railway requiring greater strength for shipping across Canada.

How it works
A combination of the material (structural steel) and the use of the triangle, a very rigid shape, give this bridge its strength. Beams attached at the bottom carry the load from the road to the trusses and they in turn to the pier and abutment

Back at school - teacher directed activity

Information is available from a variety of sources if you are interested in researching the history of an old building in Calgary.