The Transportation Department, through the Bicycle Program, conducted its first city-wide bicycle count in the summer of 2013. The Bicycle Count is one of the ways the Bicycle Program is monitoring and evaluating cycling data, in keeping with the Council approved Cycling Strategy.

The City collects and monitors information on the number of bicycle riders, gender, age, and helmet use and will be reported on annually. Dependent on weather conditions and construction, count locations that were counted first in 2013 will be counted in future years in order to gauge trends about cycling. Additional count locations will be added as resources become available.

Data collected for the 2016 Bicycle Count is presented in an interactive storybook map. It includes age and pedestrian volume maps for the first time.

Daily bicycle counts are available from sensors set up on the Peace Bridge, cycle tracks and Stephen Avenue. Using an Eco-Counter machine, cyclists are detected using loops embedded in the pavement. The data provides a breakdown of the number of cyclists on a daily, weekly, monthly and yearly basis. 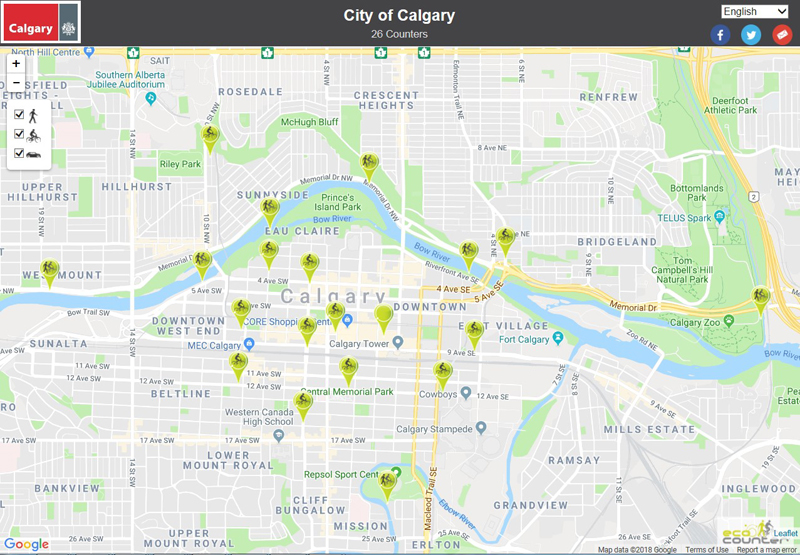 The City makes every effort to place the bicycle counters in locations that minimize interference from adjacent traffic and electromagnetic radiation. Eco-Counter states that counters are 97% accurate for detection. During our extensive testing and calibration, it was determined that the counters can miss the occasional bicycle and can sometimes count a non-bike as a bike, this makes up a small percentage of trips counted.

Eco-Counters supplement the other counting methodologies that The City uses for all modes of travel, such as live observation and MioVision cameras. One of the benefits of the permanent bike counters comes from the trends that they record. We are now able to see how bicycle traffic varies with the weather, by day of the week, and by season, something that was not possible previously.

The bicycle count display on 5 Street at the CPR underpass counts bicycles as they pass through embedded sensors in the pavement to the south of the display. Sensors to the north of the display are inactive, so those riding over the inactive loop may not see a new count on the totem. The bike trip is counted as you ride over the active loop. If two bicycles ride over the sensors at the same time (like in the photo) the sensor may only register one bicycle trip.

The City of Calgary uses cordon traffic counts to monitor traffic trends for all travel modes in the city. A cordon count totally encloses an area within the city, and counts all pedestrians, bicyclists, transit passengers, and vehicle drivers and passengers, entering and exiting the area. Downtown cordon counts are conducted in May of each year. The City uses the downtown cordon counts to examine changes in the transportation modal split and to monitor the goals set out in the Calgary Transportation Plan (CTP). 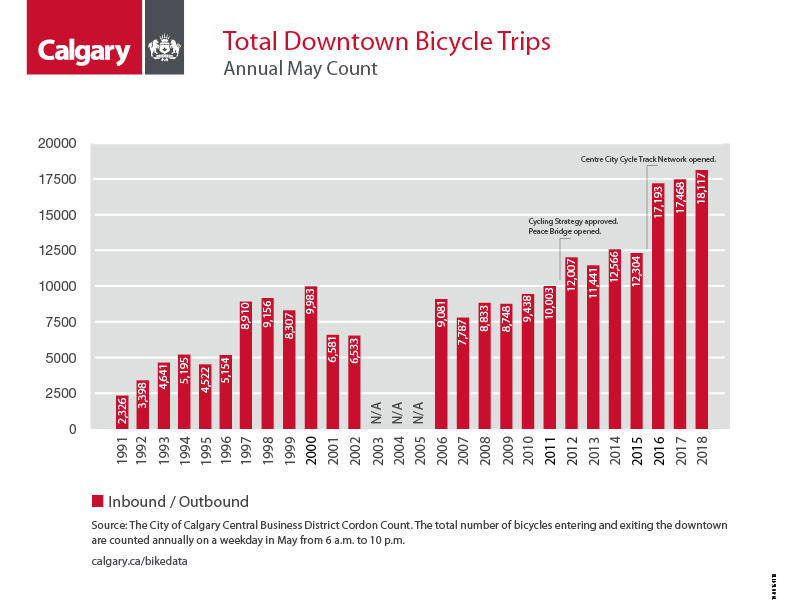 The Yearbook monitors The City's progress towards improving conditions for cycling over time. The Yearbook is an accountability tool and takes a big picture view of cycling in Calgary. The Yearbook compares information on the number of bicycle riders and bicycle safety trends. The Yearbook also covers recent bikeway projects and efforts relating to education and encouragement.

The Bicycle Volume Map illustrates the number of bicycles on different corridors in Centre City. The maps are created using data from several different counting technologies and are from most recent years where data is available.

As more data becomes available the map will be updated and released to help monitor trends ​in bicycle traffic across Centre City in the future. The format of this map is similar to the general Traffic Volume Flow Map that is produced annually. The 2016 data is available on Open Calgary.

The 2012 and 2013 bicycle volume maps showed actual volumes collected on a single weekday.

The City of Calgary Civic Census

The Civic Census is the official count of dwelling units (houses, condos, apartments etc) and the number of people living in these units. Information collected through the census is used by The City for a variety of planning and program service delivery purposes. The Civic Census is conducted at the same time every year, usually commencing April 1st.

The Civic Census collects mode of transport information every three years starting in 2011. One working resident in each household is asked how they travelled to work on the last day they worked. If multiple modes of transportation were used, the respondent was asked to indicate which mode they used for the greatest distance. 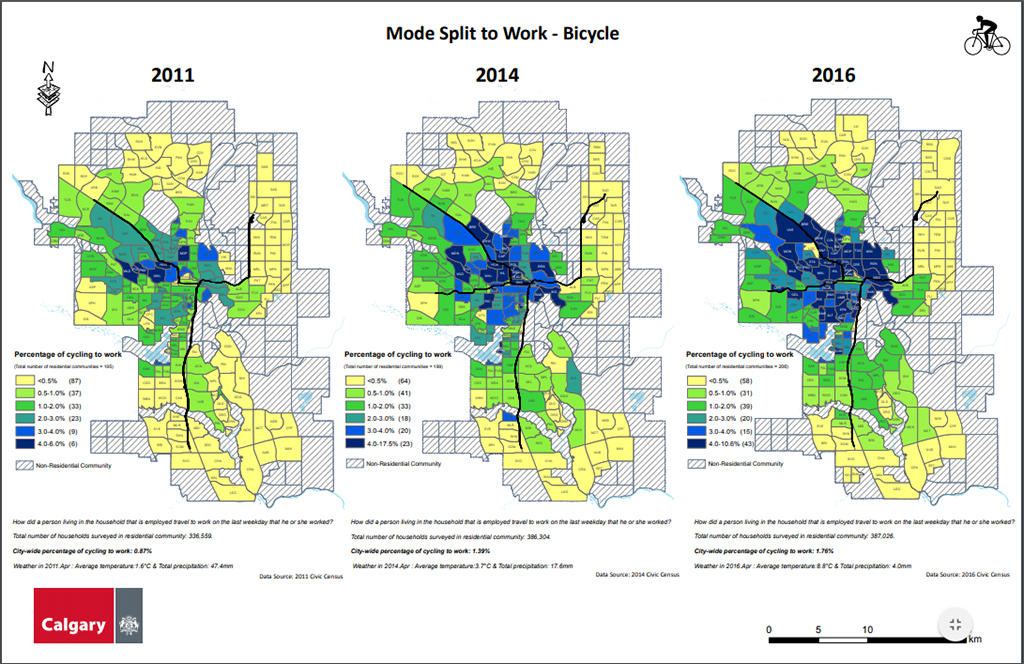