The City of Calgary is committed to exploring innovative solutions to support watershed health, biodiversity and flood mitigation. One solution is the Fish Habitat Compensation Program, an integrated effort to conserve fish habitat.

Following the 2013 flood, The City undertook a number of projects to repair and reinforce riverbanks along the Bow and Elbow Rivers. These projects helped protect critical City infrastructure but in some cases had negative impacts on sensitive fish habitat.

With support from both The Government of Alberta and Fisheries & Oceans Canada, we developed a plan to compensate for the loss of habitat and restore these vital habitat areas.

The compensation plan consists of several components including; the habitat preferences of all local fish species and mapped existing fish habitat on the Bow and Elbow rivers, and Nose and Fish Creeks. It further classified river areas such as runs, riffles, pools, backwaters, cascades and rapids and identified the type of substrate (material on the bottom of the river), among other features. 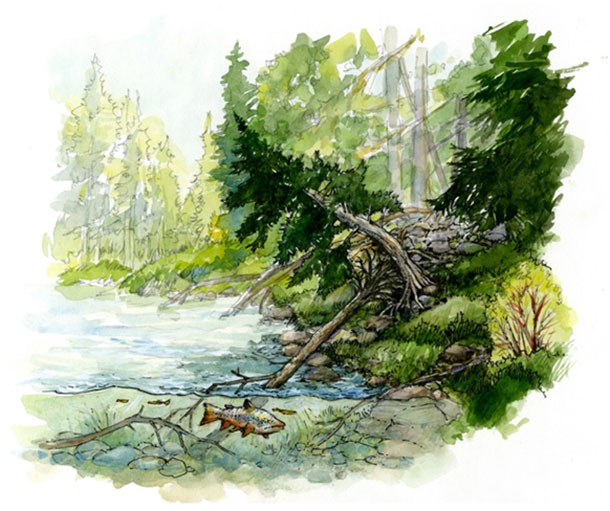 As a result of the Compensation Plan, nearly 50 projects were identified and then ranked using a triple bottom line method that considered the social, environmental (beyond just fish), and economic impacts, as well as, the anticipated benefits of each project.

The City applies bioengineering to many of its riverbank projects. Bioengineering combines vegetation along with built components to shore up eroding riverbanks. Traditional engineered bank protection like rock riprap or concrete creates a hard barrier.

This combined with water loving shrubs, trees, grasses and other native plants then take root among the built components - fortifying the land.

For additional information on the program, the Calgary Rivers Morphology and Fish Habitat Study is now available. The study can be requested by contacting 311.​