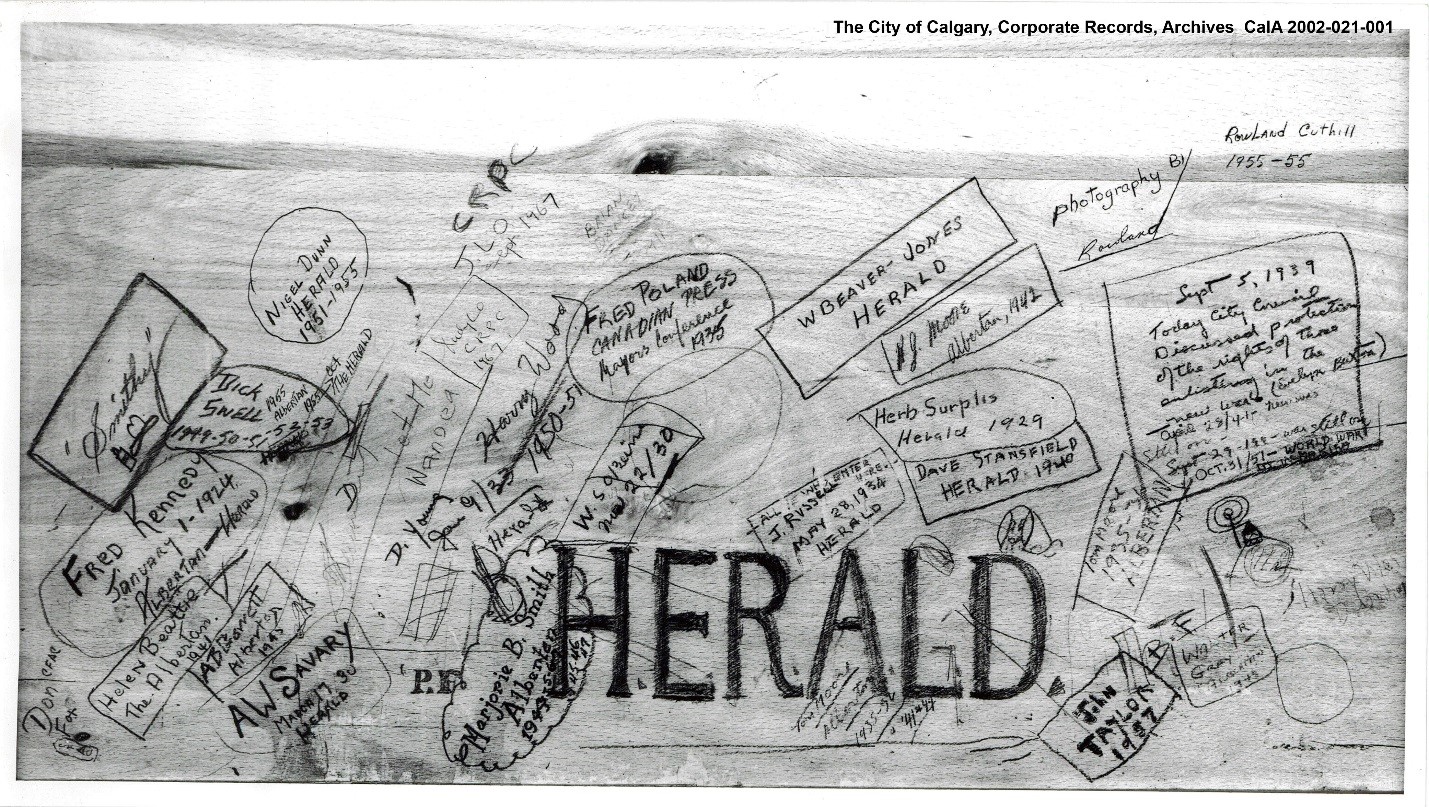 The reporter probably thought his small bit of graffiti on a piece of property belonging to The City of Calgary was so discreet no one would find it.

Little did James Brown of the News-Telegram know that writing his name that day in August 1913 inside a drawer of the press table in Council Chambers would kick off a decades-long tradition that would turn the humble table into a cherished artifact.

When Historic City Hall opened for business in 1911, the Council Chamber was fitted with beautiful oak furniture. For almost 90 years, dozens of reporters wrote their names in the two drawers of the oak table, memorializing themselves and the moments in time when they attended City meetings.

Twenty-five names follow Brown’s in an orderly list while John Walker from The Calgary Herald, reporting in 1947 and 1948, squeezed his in above.

The reporters couldn’t have guessed their names would make the press table a valued artifact, but they did apparently agree they had to earn the right to put their names in the drawers, according to an unnamed reporter for the Albertan.

The unwritten rule, in the early days at least, was that a name should not be inscribed on the bottom of one of the two drawers until the reporter had covered at least six meetings of council.”

While Evelyn Buxton from The Calgary Herald dutifully added her name to the list in 1938, she later started a fascinating yet chilling tradition of commenting on the state of wars in the world.

Then, on Oct. 31, 1951, Buxton wrote, “World war in the making.” On this day, newspapers reported that Allied and Communist negotiators of the Korean War made progress on an agreement for a demilitarized zone in Korea. But they didn’t sign the armistice for the zone until July 27, 1953. The war started on June 25, 1950.

B. Brown joined the war commentary with the date January 1973. He wrote, “Vietnam peace at hand.” It was Jan. 27, 1973 when a peace treaty was signed to establish peace in Vietnam. U.S. combat units withdrew in 1973, but the war didn’t end until 1975 when South Vietnam fell to North Vietnam. Fighting began in 1954 when North Vietnam defeated the French colonial administration of Vietnam. 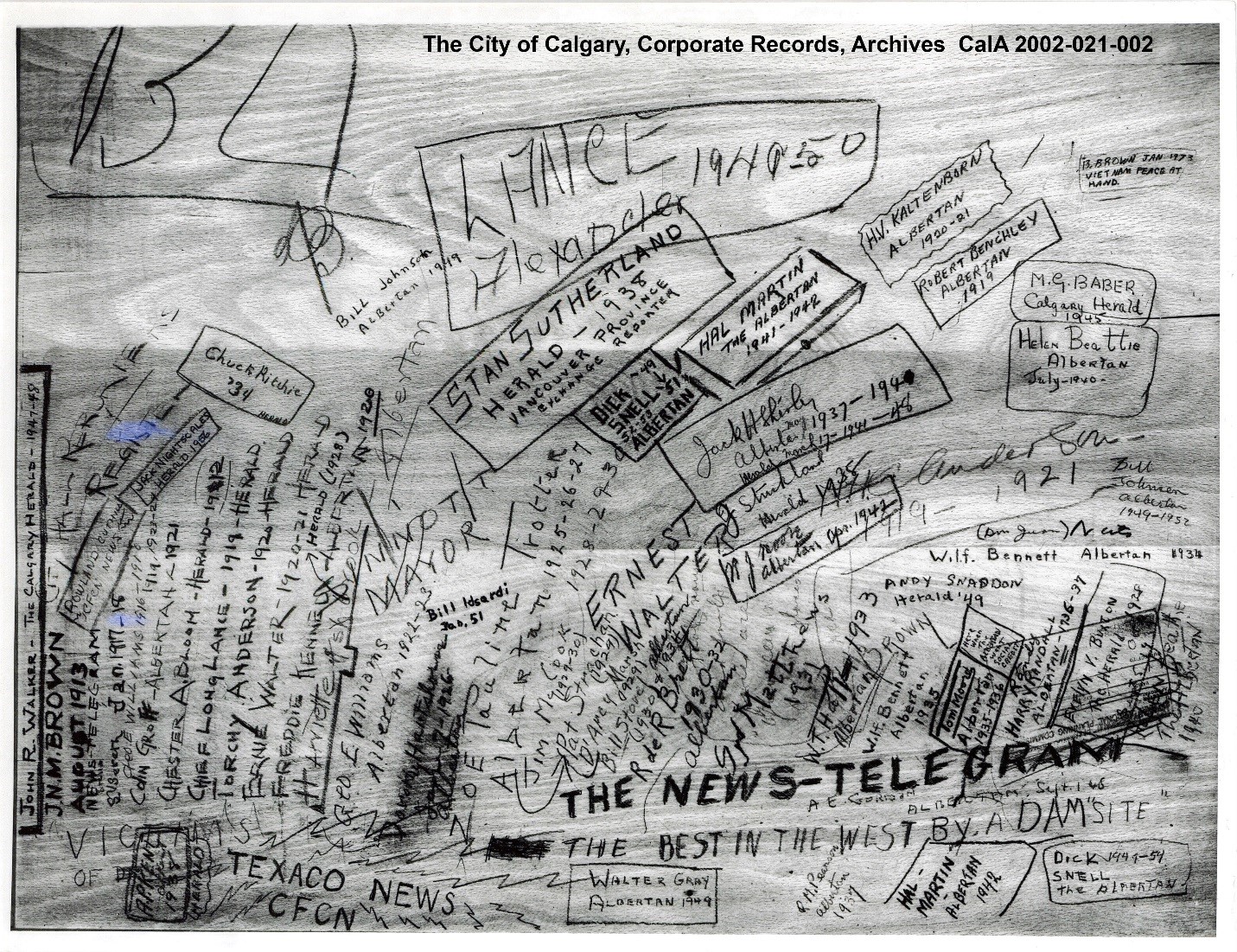 It was almost three decades after Brown’s 1973 inscription when one last note was added to the press table drawers. The writing is faint, but by enlarging the photo to 500 per cent and using reading glasses, one can just make out the words of Brian Dancey, who wrote that fall day in 2001, “This is attack of 911.”

On a lighter note, there’s a large doodle of the word HERALD, there’s a cartoon dog, and someone wrote, “The News-Telegram, The best in the west by a dam ‘site.’”

One of the early names written in a drawer was Chief Long Lance, who was also known as Chief Buffalo Child Long Lance. He was a Calgary Herald reporter whose name was written in the drawer in 1919. According to the Dictionary of Canadian Biography, Long Lance was born in the United States as Sylvester Clark Long. He was a colourful character who fought for Canada during the First World War. He was adopted by the Alberta Blood Tribe as an honorary chief in 1922 and they gave him the name Buffalo Child.

Another reporter was Arthur Parker Kent whose name was added in 1939. Kent had two sons who followed him into journalism: Peter Kent, who was also Environment Minister in Stephen Harper’s cabinet, and Arthur Kent, who became known as the Scud Stud during the 1991 Gulf War.

At least six women including Evelyn, have their names in the drawer: Zoe Pauline Trotter – 1925-27, Dorothy Hawthorn – 1926, Helen Beattie – 1942, and Marjorie Smith – 1945-47. All four worked for The Albertan, which later became the Calgary Sun. The sixth woman was Harriette Ashbrook - no date or media name.

John Taylor signed in 1957. There were no names for the next 10 years then Judy Lo from CRPC signed in 1967. The table was removed from Council Chambers in the 1950s, so Lo may not have been a reporter, but rather someone who was at a CPRC meeting. CRPC may have stood for Calgary Regional Planning Commission.

In 1973, The City was making plans for Calgary’s 1975 centennial celebrations. The hunt for artifacts was on. City Clerk Harry Sales and L.R. Webb, director of Purchasing and Stores, remembered the press table and its inscriptions, but couldn’t find a record of where the table was. After checking records and hunting through various departments, Sales found the table, battered and sporting several coats of paint, according to the Albertan.

“Miraculously, the inside of the drawers had been untouched,” the article said.

The table was restored to its oak finish, and some time that year, B. Brown made the note about peace in Vietnam.

Today, the press table is in a room in the City Archives office where it is used for meetings.

Some of the names: