The Municipal Emergency Plan remains activated to respond to the COVID-19 pandemic. Wear a mask and get vaccinated. 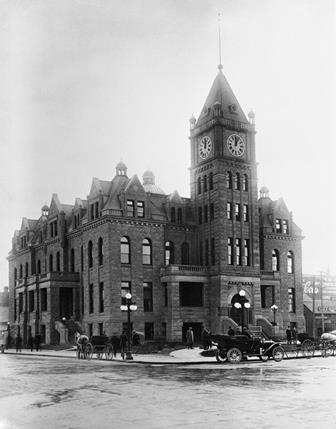 Just in time for Halloween, The City is sharing spooky ghost sightings inside Historic City Hall.

Over the years, past City employees and security officers have reported seeing the ghosts of a man and a woman haunting the building.

A few past security officers and other employees have claimed to see them. “They know something, that’s for sure,” confided an anonymous contract employee who had witnessed a colleague flee the building one night, convinced of an unseen presence.

Don Morberg, a City communications official in the 1990s, characterized the sightings to Barbara Smith, author of Ghost Stories of Alberta (1993) and More Ghost Stories of Alberta (1996). “The man may be a former prisoner who died years ago in the police lockup,” Morberg said. The female ghost was harder to explain. “She’s seen on the old stairs,” he explained. “We have no record of any female dying in the building. I’ve heard that she might be a former alderman’s wife or perhaps a madam who had been locked up in the basement cells at one time.”

Morberg was right about the police lockup. From 1911 to 1914, Historic City Hall doubled as the police station and city jail, just as the old Town Hall had been for years prior. And there are records of prisoner deaths in the cells. At least two men—J.W. Lewis and William Morgan—died in the cells. And, according to the Albertan, the first prisoner when the cells opened in 1911 was a woman, Kathleen “Kitty” Quinn. (The rival Calgary News Telegram judged that Charlie Munro, was the first. )

Nobody can say for sure if the ghostly accounts are linked to the two known deaths in Historic City Hall all those years ago. To those who believe, ghosts can be found where their energy or memory remains powerful.

In that case, there is no shortage of personalities whose energy and memory might permeate the very sandstones that make up Historic City Hall’s form. Could the man be Rudolph Engle (circa 1876–1912), who installed Historic City Hall’s clock in 1910 and died in a hunting accident in 1912? Could the woman be Acting City Clerk Amelia Adcock, The City’s first female manager, who died relatively young in 1922?

Until a more definitive sighting occurs, it will have to remain a mystery.