Prince's Island Park is a beautiful highly used park in downtown Calgary that holds many large events throughout the year including the Canada Day celebration and Calgary Folk Festival.

Note: Prince's Island Park is a large festival park and can not be booked for small functions.

Since its development as a park in the 1950s, Prince's Island Park has been recognized as an urban oasis and is an important contributor to the cultural and recreational quality of life for Calgarians. In March 1999, Council approved a renovation of the island, including wetland construction and native plant restoration.

The Chevron Learning Pathway is an environmental educational pathway on the east end of Prince's Island Park. The pathway winds around a constructed wetland designed to treat storm water before entering back into the Bow River. Interesting interpretive signage explains how a wetland works and presents meaningful information about wildlife, habitat and water quality. It is an environmental, educational, and recreational resource that connects people with nature in an interactive way.

Prince's Island was named after Peter Anthony Prince, a lumberman from Quebec who came to Calgary in 1886 and founded the Eau Claire Lumber Mill. The Eau Claire and Bow River Lumber Company dug a channel (now the lagoon) to get logs from Kananaskis closer to the Calgary sawmill, resulting in an island.

In 1889 Prince formed the Calgary Water Power Company to supply electric streetlights to the town. Despite its name, the company used steam generators powered by sawdust until 1893 when Prince built Calgary's first hydro-electric plant near the east end of the lagoon. After his death in 1925 the mill was still operational until 1944. The land was purchased by The City from the remaining Prince family in 1947 for development of park land.​​​​​​​​​​ 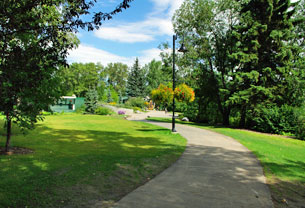