Beaverdam Flats is a natural environment park that lies along the eastern bank of the Bow River in the southeast part of Calgary.

Beaverdam Flats Park lies along the eastern bank of the Bow River in the southeast part of the city. The park was created in the early 1980s and occupies about 43 hectares. The name is derived, as you might guess, from the fact that there were beaver dams down on the flats.

An extensive shrub community, consisting primarily of Canada Buffaloberry, Saskatoon, American Silverberry and Water Birch, is found along the escarpment.

The old river channel at the base of the escarpment provides an important aquatic habitat that differs markedly from the fast flowing waters of the river. Watch the river for diving ducks such as Common Goldeneye and Buffleheads and check the old river channel for dabbling ducks such as Mallards and Blue-winged Teal. Also look along the river for Bald Eagles hunting for their prey.

The gravel bar provides the foundation for the Balsam Poplar Riverine Forest. The aging poplars are home to woodpeckers, nuthatches and chickadees. Look in the shrubs - look for catbirds, kingbirds and blackbirds.

The park includes a section of the escarpment but most of the area is on the flats. The flats are gravel deposits on an outer curve of the river. Consequently the shape of the park is constantly changing as some areas are washed away and others built up.

Prior to becoming parkland, the flats were owned by various large land-owners although there is no evidence of major human activities or settlement in the area. But, there is an interesting structure called a "sappers bridge" built in 1992 by military field engineers, otherwise known as sappers. 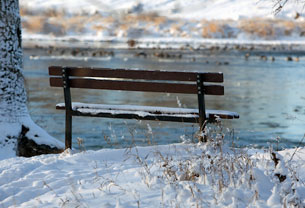 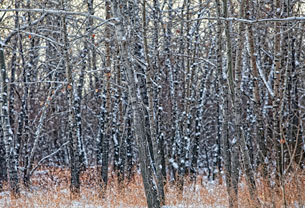