The Douglas-fir Trail is part of Edworthy Park which lies on the southern bank of the Bow River, as it flows through the southwest part of the city.

The Douglas Fir Trail is now open to the public.

Area: The trail is 2.5 km long from Edworthy Park to Cedar Crescent S.W.

Land acquisition for Edworthy Park began in 1962 and now covers about 169 hectares. The park was named after Thomas Edworthy, an early landowner.

The trail runs along a densely wooded escarpment with dramatic views of the Bow River Valley, particularly from "dead man's drop". Because of extremely icy conditions, the trail is closed in winter and early spring.

The escarpment is 200 feet high and very steep. Natural springs, plus water draining from the communities above result in a very unstable slope. Continued "creeping" leads to trees leaning at odd angles. A major slide left a gaping scar on the escarpment. The tipsy condition of the trees has led to an alternative name, the "the drunken forest".

Walk in a "fake fir" forest. Douglas-firs are not really fir trees--they are their own genus. You can have a unique nature experience of Calgary by walking among these Douglas-firs. Combined with those in adjacent Bowness Park, this is one of the most easterly stands of this species in Canada. Douglas-firs are usually found in the Rocky Mountains and on the coast.

The coastal variety of Douglas-fir trees are massive--much larger than the variety found in Alberta. However, the specimens along the trail are a very respectable size—up to seven and one-half feet in diameter. Some trees are about 500 years old. Douglas-firs require considerable moisture and protection from drying winds, both of which they receive on these north-facing slopes.

In addition to the Douglas-firs, the trail passes through low moist areas, stands of Balsam Poplar and White Spruce. Some of the spruce trees are also very large but differ from the Douglas-firs in a number of ways. The most obvious difference is that the bark on the spruce is relatively even and on the Douglas-firs it is deeply furrowed with reddish lines.

The coniferous forest is home to the birds and mammals that have adapted to this ecosystem such as Least Chipmunks and Red Squirrels. It is also home to cone-eating birds like the Red and White-winged Crossbills, and some of the tiniest birds around—Ruby-crowned and Golden-crowned Kinglets. 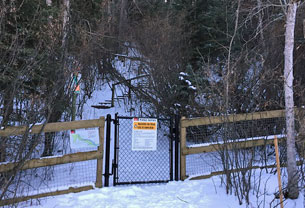 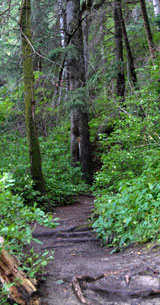