The Satin Moth (Leucoma salicis) is a non-native insect that was introduced to North America from Europe in the early 1920s. The satin moth population in the Calgary area has been generally non-problematic. This season a combination of environmental events have permitted Satin Moth populations to expand and become more noticeable. The caterpillar feeds primarily on the leaves of poplar species. They have also been known to feed on willow and oak trees.

This season a combination of environmental events have permitted Satin Moth populations to expand and become more noticeable. Read more about the City's plan.

Satin Moths can completely strip and defoliate large mature trees of all their leaves. They produce two occurrences of leaf eating caterpillars in a season and therefore can defoliate a tree twice. Mature healthy trees normally have enough resources stored to be able to recover from this type of damage. Repeated, severe defoliation over a few seasons can result in tree mortality. Rolled leaves containing pupae and silk webbing on stems and branches are signs of the Satin Moth pupae. 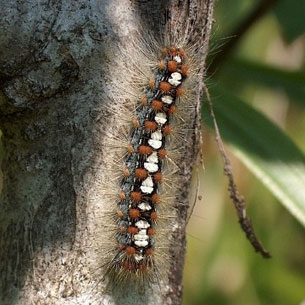 The mature Satin Moth caterpillars grow to be 3.5 to 4.5 cm long, and are pale to medium grey-brown, with a darker head and back. Their backs are black with a central row of white or light yellow markings. They can be confused with the tent caterpillar which has a white strip down its back bordered by two blue lines. The adult moths have pure white wings with a satin-like lustre. They have a wingspan ranging from 3.5 to 5.0 cm and can be distinguished from other local white species by narrow alternating black and white bands on their legs.

Over the past two years, Parks has been monitoring and tracking where large populations of the Satin Moth have appeared. They have been observed in large numbers in the communities of Willow Park and Maple Ridge and also seen in smaller isolated locations like as West Confederation Park, Confederation Park and along 9 Avenue and 16 Street in the north. 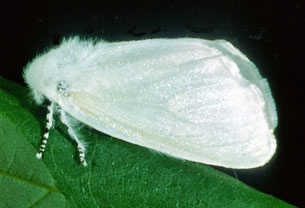 The first Satin Moth caterpillars of the season start to appear the first week of June. To combat this pest, high pressure water spray trucks are used to wash down the large poplar trees, focusing on the main trunks and lower lateral branches where the insect "overwintered". This approach achieved good results in 2012 and 2013 and will be utilized again in 2014 as the insect and egg masses dislodge effectively from the tree trunks. This process is smooth and cost effective as only water is needed to manage the Satin Moth.

Parks' Urban Forestry and Integrated Pest Management divisions are in the field monitoring the impact and spread of the Satin Moth caterpillar, in addition to looking for the presence of wasps that eat this caterpillar.

In 2012 and 2013, poplar trees that were infested with Satin Moth eggs masses were sprayed with high pressure water. These trees were located along streets and in City parks. Observations in the field noted that this technique was more successful than anticipated. The eggs masses at this stage were easily removed from the trunks and lower branches of the trees.

Parks consulted with The City of Edmonton on their experience with managing Satin Moth. A small introduced parasitic wasp (Cotesia melanoscela) has established in Edmonton and for the most part now suppresses Satin Moth populations. This is typical in the natural environment where a pest will establish and the regulating predator is a few seasons behind. Once the predator is established it will keep the pest population in check. 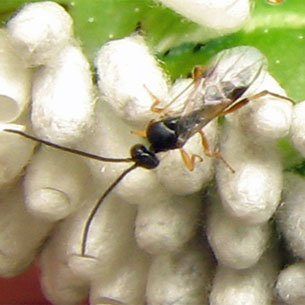 Further research from areas which have dealt with this problem in the past suggests that the parasitic wasp Cotesia melanoscela has been considered the most effective solution for reducing Satin Moth infestation. Recent field surveys have discovered that this insect is currently established in the impacted areas. Due to the readily available food source a rise in wasp population which may serve to counteract the spread of Satin Moth is anticipated. The wasp is highly effective (90-95% mortality) as it attacks both occurrences of the caterpillar stage significantly impacting the next season’s generation.

What you can do for your trees

Residents can help manage Satin Moth on trees on their property. How you manage them is closely related to the insect’s lifecycle. Satin Moth overwinters as a caterpillar in leaf litter, in the lower branches, and in the furrows of the bark of the tree. The Satin Moth caterpillars will begin their climb back up into the tree in May. Applying “sticky bands” is still an option for homeowners as they are able to more closely monitor Satin Moth activity and the effectiveness of the band.

The greenish egg masses concentrated on the lower tree trunk can be scraped off with a dull blade and destroyed before they hatch. High pressure washing does appear to be an effective management technique. These services can be secured through local tree care companies. These eggs masses appear around mid-July. Again, “sticky bands” can be applied to the tree trunk during leaf out in May and again in July to catch newly hatched caterpillars as they disperse into the canopy of the tree. These bands can be found at local garden centers and should be reapplied once they are saturated with the caterpillars. Also, residents can contact local landscape and tree care companies that provide Integrated Pest Management (IPM) services.

Learn more about tree pests and diseases in Calgary​
​​​​​​​