​Edworthy Park sits in a valley along the Bow River in southwest Calgary and includes the majestic Douglas Fir Trail and historical Lawrey Gardens.

Note: Biophysical information is being collected in Edworthy Park to support future design opportunties, and to identify areas that may be suitable for restoration and enhancement. Data collection will take place throughout 2016.

Bordered by the Bow River and the community of Wildwood, Edworthy Park is a large diverse park that makes it a year-round destination. Edworthy Park includes the natural areas of Douglas Fir Trail and Lawrey Gardens.

Edworthy Park was once a part of the Cochrane Ranch and was eventually purchased by Thomas Edworthy in 1883. Along side his neighbour John Lawrey, Edworthy established a profitable garden market that supplied fresh fruit and vegetables to railway crews and homesteaders. In later years, after discovering sandstone on his property, he operated sandstone quarries for the construction of many buildings in Calgary. The land was purchased by The City in 1962 for the development of a park.​​​​​​​​​​​​​​​​​​​​ 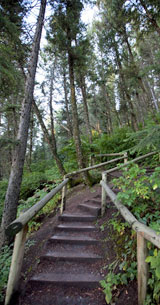