Council’s Notice of Motion requested Administration to undertake an amendment to the West Macleod Area Structure Plan (ASP) to include an additional 61 hectares (151 acres) of undeveloped land in southeast Calgary, west of Macleod Trail. The area of land is east and south of Pine Creek, west of the CP Railway Line and north of city limits. This ASP amendment is part of the developer-funded model.

On September 12, 2017, Administration presented the proposed West Macleod ASP amendments to City Council where a Public Hearing for the item was also held. The amendments were approved by Council. The meeting minutes and video are posted on the Council website. 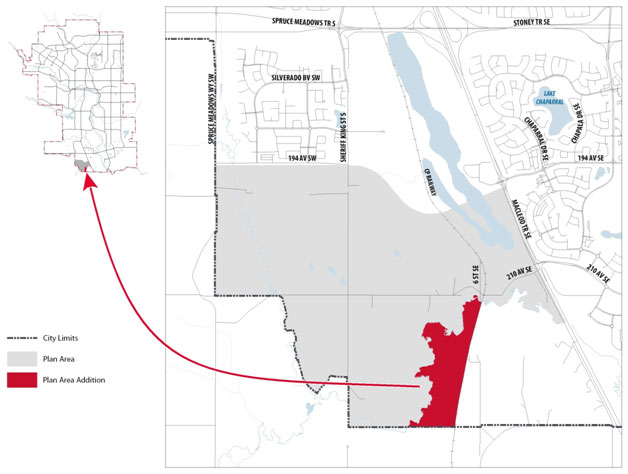 The West Macleod Area Structure Plan (ASP) was adopted by Council in 2009.Council rescinded and adopted a new ASP to include an additional 185 hectares (460 acres) of land south of 210 Ave S. to accommodate substantial future growth in Calgary’s southwest.

On October 4, 2016, Council passed a Notice of Motion​ directing Administration to enter into an agreement with the landowner, Highfield Investment Group Inc, to fund the cost of amending the West Macleod ASP under the Developer Funded Model. The purpose of the amendment is to revise the south eastern boundaries of the West Macleod ASP to reflect a logical extension to the Canadian Pacific Railway line, identify ecologically significant lands (including the protection of Pine Creek) that qualify as Environmental Open Space Study Area and review long-term connectivity options into future growth areas and annexation lands contained within the Municipal District of Foothills.