Pearce Estate Park lies in a curve of the Bow River as it flows through the southeast part of Calgary and contains a 15 hectare reconstructed wetland and is home to the Sam Livingston Fish Hatchery and Bow Habitat Visitor Centre.

The Pearce Estate Wetland lies in a curve of the Bow River as it flows through the southeast part of the city. The 15-hectare wetland area, when combined with the adjacent provincially operated Bow Habitat Station, results in a 21-hectare park. The area was donated to the city by William Pearce, a prominent early Calgarian who died in 1930. The current wetland area and interpretive trail were redeveloped and opened to the public in 2004. 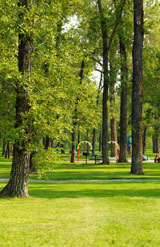 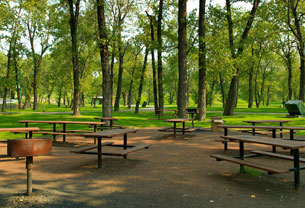 Let yourself be guided through a tranquil wetland in the middle of the city at Pearce Estate. A signed interpretive trail guides you through a constructed wetland filled with native plants and animals. The signs tell how the wetland came to be and describes the wildlife seen around you.

The plants typical of a Balsam Poplar riverine forest, such as willows, Water Birch and Red-osier Dogwood thrive in the area.

The wetlands add to the wide biological diversity within this small area. There is the emergent vegetation usually associated with marshes such as cattails and bulrushes. And, there is plenty of submergent vegetation, such as Sago Pondweed and floating vegetation, like Common Duckweed.

Birds and other animals that prefer this type of forest, such as the White-breasted Nuthatch and Gray Catbird are very common. Because some of the Balsam Poplars, which many people call Black Cottonwoods, are old, they have many cavities. These attract cavity-nesting birds such as Tree Swallows, Northern Flickers and Common Goldeneye.

Numerous species of waterbirds, including American Coots, are found in the ponds. Dabbling ducks feed on the many species of invertebrates such as Water Boatman, Diving Beetles and Midges are found in this environment.

The wetlands have been transformed several times. They began as part of a riverine forest complex, then during Pearce's ownership they were used in part for agriculture. After that they were converted to a city recreation park and are now being "re-naturalized" to something approaching their original condition.

The estate of William Pearce occupied about 80 hectares in a bend of the Bow River. In 1889, Pearce built a grand sandstone house, which he called "Bow Bend Shack." It was torn down in 1957. Part of the estate is now an important nature interpretation facility jointly developed and operated by The City, Province, private and non-profit sectors. Facilities include the provincial Sam Livingston Fish Hatchery Visitor Centre and "Walking on Water Trail," the BP "Discovery Trail," and the Ducks Unlimited "Webbed Foot Lane." 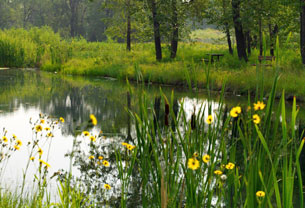 William Pearce donated valuable land to The City of Calgary around 1929 that later became Pearce Estate Park. However, he is recognized for many other accomplishments apart from this generous gift. He was a prominent pioneer who had a hand in opening up the Canadian West.

Born in Ontario in 1848, he began his 30-year career in government service in 1874, beginning with a position as a surveyor. Adventure was part of the job: William became involved with the Red Deer River Settlement and surveying the location of the international boundary.

In 1882, he became Inspector of Dominion Lands Agencies. His jurisdiction stretched from Winnipeg to the eastern foothills of the Rockies. As the senior official overseeing 400,000 square miles of land, he was responsible for the development and allocation of all land, forests, mineral and water resources - sometimes called the "Czar of the West" because of his influence. In 1884, he moved to Calgary to accept a position as Superintendent of Mines. After leaving the federal civil service in 1904, Pearce worked for the CPR until he retired in 1926. He died in Calgary in 1930. His grave is located in the Union Cemetery.​​​​​​​​​​​​​​