The City’s municipally-owned Internet of Things (IoT) wireless network project won the 2018 Alberta Minister’s Award for Municipal Excellence. This award recognizes the innovation and creativity of larger municipalities with populations of 500,000 or greater.

The City's IoT network also won the 2019 Smart 50 Award, presented by Smart Cities Connect and US Ignite to recognize the most influential projects in smart communities worldwide. The IoT network won in the Digital Transformation category as one of the most transformative smart projects of the year.

The City of Calgary aims to be an early adopter of new technologies that help us better serve citizens. We are the first Canadian city that built and owns a new type of wireless network. This network, providing near city-wide coverage, has the potential to connect City devices, business units and projects using the "Internet of Things" technology to enhance communications, planning and citizen services.

Semtech and The City of Calgary: LoRaWAN-based smart city

Visit Sm​art City: The City of Calgary to view a series of videos, use cases, white paper and blog posts featuring The City’s municipally-owned LoRaWAN network.

Learn how The City’s Devonian Gardens uses LoRa technology to maintain acres of plants indoors, how the Urban Alliance designed an innovative solution to monitor and characterize sound throughout the city and how Shaganappi Point Golf Course tracks pace of play to improve operational efficiencies. 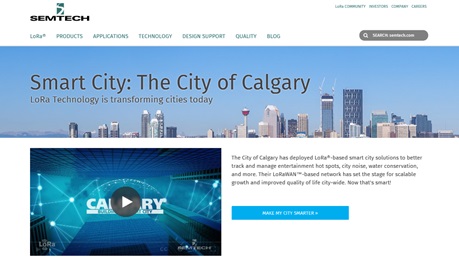 Go to the "Discover the Smart City of Calgary" video playlist.

Calgary envisions CNoT will be used by many of The City’s 32 business units and can also be used as part of Living Labs pilot projects. If your business is interested in accessing The City’s LoRaWAN network infrastructure to test ideas and products in a real-world environment, please contact: LivingLabs@calgary.ca